Seaford Ladies, in only their third full season together, travelled to Henley-on Thames on Sunday for the final of the Ladies RFU Vase against Coventry Welsh Rugby Club.

On arrival at the superb home of Henley Hawkes RFC, the team were greeted with the sight of a very large opposition warming up and the omens were not looking good.

In very damp conditions the game kicked off and for the first ten minutes both sides tested the other with some good play from both forwards and backs. On sixteen minutes the deadlock was broken when, following a couple of penalties Seaford had found themselves close to the Coventry line and a great forward effort saw Laura Peerless round off 5 phases of play to dive over in the corner. Lizzie Fender Missed the difficult conversion but Seaford lead 5-0

The rest of the half was very even with both sides playing some attractive attacking rugby but just before the break as a Seaford error was pounced on and the fastest lady on the park darted off with the ball from the half way line to score under the posts. With the conversion Coventry took a 7-5 lead into the half time break.

Coach, Ian Newby, must have had some sound advice at half time as the ladies came out playing the best rugby ever seen by the team, cheered on by Seaford’s 30 or so vocal supporters.

5 minutes into the second half Lizzie Fender rounded off a flowing move involving both forwards and backs to dive into the corner. The conversion was missed but Seaford had taken the lead 10-7

Both sides upped their game but the turning point in the match came after 60 minutes when Seaford rucked Coventry off of their own ball to steal it and release Laura Dulat who sprinted to the corner for the team’s third try. Fender made the brilliant touch line conversion and Seaford lead 17-7.

Now with their tails up, Seaford were rewarded with another try three minutes later when, after a series of great forward drives, Sarah Duffy crossed the line in the corner to bring the score to 24-7.

With Seaford thinking the game was just about in the bag Coventry threw the proverbial kitchen sink at them and came close to scoring on a couple of occasions but excellent defence held them out and  at the final whistle, cue the celebrations by both players and their loyal supporters on their incredible win.

After the match, team captain Nadine thanked Coventry Welsh for a great game of rugby which was undoubtedly closer than the final score suggests. 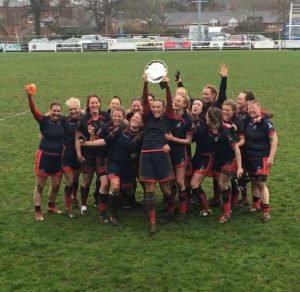 We are happy to bring you this week’s Astrology Card Reading by Asha Kumari. We are, as always, grateful to Asha for allowing us to share these readings with you. Asha is available for private […]

We are happy to bring you this week’s Astrology Card Reading by Asha Kumari. We are always grateful to Asha for allowing us to share these readings with you. We hope that you enjoy these […]

Wishing you all a Happy Halloween however you may be celebrating this fun time of the year. We hope that whether you celebrate in style, have a wonderful fancy dress party or a small family […]