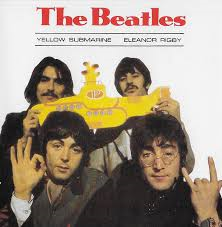 Last time we jumped into the future, but this month, we’re travelling backwards to the sixties when life was a whole lot easier to deal with simply because it was less complicated and demanding. When life in the fast lane referred to running for a bus and money was pounds, shillings and pence.  Besides, the music was painless on the ear and lyrics could be understood. Like the number one single this month – “Yellow Submarine” by The Beatles.  “We all live in a yellow submarine, a yellow submarine, a yellow submarine.”  What could be easier? Written by Lennon and McCartney as a children’s song, and for the first time featuring drummer Ringo Starr on lead vocals, “Yellow Submarine” attracted help in the studio from Rolling Stone Brian Jones who clinked glasses, and Marianne Faithful and Pattie Boyd who provided support vocals. This double A-sided single – “Eleanor Rigby” on the flip – was released on the same day as “Revolver” from whence the titles came.  The Beatles broke away from their previous policy by allowing album tracks to be issued on a single in an attempt to thwart cover versions of “Eleanor Rigby”, or as George Harrison so succinctly explained – “We decided to put it out rather than watch dozens of other artists score a hit.”

“Yellow Submarine” was also the title of a film that followed. The story goes that when United Artists were chasing the Fab Four for the follow-up film to Help!  Paul got the idea of a coloured submarine during a Greek holiday in 1963.  Apparently, he became addicted to an iced yellow sweet known locally as a submarine, although John has been quoted that while under the influence of LSD, he had a vision of an underwater craft. Either way, this cartoon movie would fulfil their contractual obligations. Apart from performing the songs included in the film, The Beatles’ crazy colourful cartoon images were voiced by actors, with the real thing making a cameo appearance in the closing scene. By all accounts, there was a hidden meaning behind the project. Wasn’t there always with The Beatles!  It goes something like this. A bunch of friends got together to form a group with dreams of becoming famous and rich.  Hence the lyrics “sea of green” – green representing wealth.  “And we lived beneath the waves, in our yellow submarine” giving the nod to this globally successful band living a solitary life in their own neighbourhood  ie  Beatlemania.  OK, I kinda see it. Anyway, Paul said “It’s a happy place to be.”   So that’s fine.

Sitting just below The Beatles was a group said to be heavily influenced by them, The Beach Boys with “God Only Knows” – a classic that’s defied any signs of aging.  Using God in the lyrics and title wasn’t the ‘done thing’ at this time, but The Beach Boys happily explained they weren’t referring specifically to any God, rather to a higher force.  Referencing life after the death of a loved one,  Brian Wilson explained – “…It’s like being blind but in being blind you can see more.”  Whatever interpretation you choose, the lyrics are totally compelling because of their simplicity.  Taken from the group’s 11th studio album “Pet Sounds”, now believed to be one of the most influential concept releases in the history of music, “God Only Knows” remains one of the group’s most endearing songs.   As an aside here, our very own Joss Stone’s version is remarkably poignant as she sings from the very depth of her soul.

The Small Faces were patiently stuck at number three with “All Or Nothing”, written by group members Steve Marriott and Ronnie Lane.  They did get to the top eventually though.  This British band of young men probably helped spearhead the Mod culture of the time – Chelsea boots, parkas, scooters, tailor-made suits, shirts with button-down collars, and a great taste in R&B music –  while being pioneers of Britpop with a raft of hit sixties music like “Whatcha Gonna Do About It”.  From this phase, they evolved into a successful psychedelic outfit releasing the likes of “Itchycoo Park” and “Lazy Sunday”. 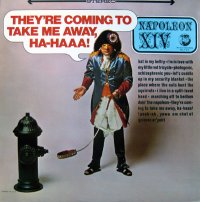 There’s always one isn’t there? And this is it.  “They’re Coming To Take Me Away Ha-Haa!” by the unlikely named Napoleon XIV aka Jeremy Samuels, who also wrote this, um, novelty song. Telling of man’s torment after a break up and his spiralling into insanity, until being committed to a ‘funny farm’ (his words not mine), listeners either sympathised with his fate or couldn’t care a less. However, before we cut our Napoleon off before the disc ends, all is explained.  He’s driven to distraction not due to the break up of a relationship with a woman but rather his dog that ran away. Nevertheless, the song made me feel a little uncomfortable, so we’ll move on quickly.

The Troggs’ “With A Girl Like You”, Cliff Richard’s “Visions” and “Summer In The City” from The Lovin’ Spoonful

were among those that rounded off the top ten this September.  Phew – sanity returned!  Lower down and hitting the chart for the first time were a plethora of wonderful, diverse singles – Sonny and Cher’s “Little Man”, The Who’s “I’m A Boy”, The Supremes with “You Can’t Hurry Love” and our own blue-eyed soul singer, Dusty Springfield and “All I See Is You”.  All of a sudden, everything is good in the world.

With John Huston playing Noah and the voice of God, The Bible: In The Beginning was premiered this month to

become the second highest grossing film of the year (the first being the epic Hawaii starring Julie Andrews and Max von Sydon as the principal actors).  The movie covered The Creation, Adam and Eve, Cain and Abel, Noah’s Ark, the story of Abraham, and the levelling of Sodom and Gomorrah, two evil and nasty cities that God destroyed with a deluge of brimstone and fire.  Prior to their total wipe-out, He sent two angels to forewarn the good people to leave the cities so they could be saved.  This film was intended as the first in a series about the Old Testament but as it happened; the sequels remained unmade.  Heralded as “magnificent almost beyond cinematic belief”, “powerful, quaint, funny, thought provoking…filled with portents of doom” and “…impressive in some instances, absurd in others”, the film’s principals included Peter O’Toole, Ava Gardner and Richard Harris.

From the public cinema screen to its little sister in private home settings, and a new take on politics.  Leslie “Ding Dong” Phillips starred as Dennis Proudfoot in BBC1’s new sitcom set in the Foreign Office in Whitehall.  Titled Foreign Affairs (that’s original!) the womanising Proudfoot was personal assistant to Austin Trevor’s character Sir Hugh Marriot, and together they sparred with their opposites at the Soviet Embassy in London.  Ronnie Barker and Richard O’Sullivan also contributed to the fun.  That’s about all I can tell you I’m afraid, oh, except there’s been no re-runs of the six episodes because they were wiped due to the BBC’s archival policy at the time.  And this got me to thinking about the BBC’s policy so I searched some more and, not to put a too finer point on things, was saddened with what I unearthed because the BBC actually erased its own history.  Here’s a short back story. Video tape was an extremely expensive storage medium so it was considered prudent to re-use cassettes rather than purchase new ones.  Within their offices, the Corporation had a bulk-erasure machine which systematically wiped shows that had, and I quote,  “exhausted their usefulness”.  So they were rubber stamped “no further interest”.  Here’s an astonishing fact for you – out of 253 produced episodes of Dr Who, the BBC has not a single original copy.   Also, to prevent their series Not Only…But Also from being erased, Peter Cook and Dudley Moore offered to pay the BBC for the tapes.  They were turned down.  Anyhows, there’s so much more but as I’ve probably written enough about this for now, why not visit the site Wipe Out: When the BBC Kept Erasing Its Own History, if you’re interested.  Fascinating stuff for sure: shame on you BBC!

So, that’s it for now, but I’ll be back next month with more to tickle your fancy in the nicest possible way.  Life remains extremely challenging for us all so a little diversion into the sixties maybe just what the doctor ordered.