After extolling the virtues of the “Adventure Boyz” movie last time, which now appears to be earmarked for general release, I’m planning a return-to-normal format this month.  Hah, we’ll see, as we take a peek at the early seventies, the decade of changing ideas, politics and, of course, music.

Pushing Diana Ross off the top spot where she had sat comfortably for four weeks with “I’m Still Waiting”, were The Tams with “Hey Girl Don’t Bother Me”.  However, before getting into that, a little back story on Diana’s single. It was a track on her “Everything Is Everything” album and there it should have stayed, except that Tony Blackburn, then a DJ on Radio One, began giving it airtime.  This led to a listeners’ response that promoted Tony to persuade EMI Records/Motown to issue the title as a single. Hey ho – it hit the top.  Pat on backs all round, and nobody was more surprised than the singer!

Anyway, to October’s chart topper, “Hey Girl Don’t Bother Me” which was first released during 1964, but re-issued when it was adopted by the Northern Soul scene.   Talking of this, I recently attended a Northern Soul Survivors Weekender in Butlins at Skegness, where music and artists were full-on from the Friday evening through to early Monday morning.  My, this ol’ lady was running on fumes that’s for sure, but it was a lifetime experience.  Headlining this event, which also celebrated Motown’s 60th birthday this year, were company divas Chris Clark (“I Want To Go Back There Again”), Brenda Holloway (“You’ve Made Me So Very Happy”) and Gloria Jones (“Tainted Love”). Plus, a host of other A-liner soul artists which kept thousands of fans at fever pitch from night one.  I’ve known the ladies for several years now, so it was more like a reunion for us and, my, did we have a huge amount of catch up to do. Surprised they had time to perform in the Reds theatre which, when full, 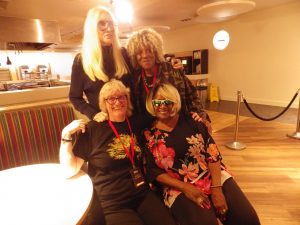 was a sweatshop, but a happy one.  In hindsight, I reckon I kept up with the best of them, although do admit to taking a Sunday afternoon siesta to see me through the night when the finale was after midnight with all the artists returning to the stage.  Tears mingled with perspiration on our faces!  An amazing experience despite sleeping quite a lot for the next couple of days……

Back to 1971 as veered off the subject in hand – as always.  So, “Hey Girl Don’t Bother Me” from the Atlanta, Georgia group, not only hit number one in Britain, but also the Irish chart, making them the first black soul group to do so.  Imagine that?  Personally, I much prefer their “Be Young, Be Foolish, Be Happy” from 1968, as it’s more upbeat in feel and emotion. What say you?  Sitting patiently below The Tams was our Rodney with “Maggie May”, one of his most loved songs. However, what I didn’t realise was the song tells a story of a young boy being involved in a relationship with an older woman, based on his own experience.  He told Q Magazine in January 2007 “(The song) was more or less a true story about the first woman I had sex with, at the 1961 Beaulieu Jazz Festival.” Her name wasn’t Maggie, or May, but rather one he plucked from an old Liverpudlian song about a prostitute.  I’ve often commented during my long association with the music business, that flipsides of released singles are often the better songs, and in Rod Stewart’s case with this, “Reason To Believe” was the original top side.  Radio station DJs were responsible for flipping over the seven inches of flat vinyl, whereupon “Maggie May” – whoever she was – launched his career as a solo artist.  The youngsters reading this may well remember his performance with the Faces on the weekly chart music programme Top Of The Pops where radio DJ John Peel played the mandolin.  Or, at least, pretended he was.  Such fun was music in those days aye? 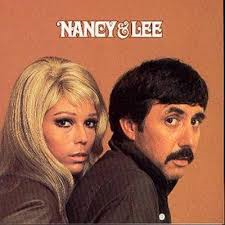 “Did You Ever….?”  from Nancy Sinatra and Lee Hazlewood were below Rod.  It was an insignificant song, yet catchy enough to propel it into the top three.  Nancy, the eldest daughter of Frank, snuggled in nicely with country/pop singer, Lee, with the cute moustache.  However, Nancy’s biggest selling duet was with her blue-eyed dad. Titled “Something Stupid”, released during 1967, it was called the “incest song” by some people – yup, tis true –  but that probably only increased its sales to push it to the top across the globe, including Britain. Oh, there’s another significant version, of course, this time from Robbie Williams and Nicole Kidman, when the biggest moan was that she couldn’t sing!

As we move down the top ten for this October, there’s some serious music once you’ve risen above “Tweedledee, Tweedledum” by Middle Of The Road.  I don’t wish, for one moment, to take anything

away from this Scottish pop group, but I’m sorry to say, “Chirpy Chirpy Cheep Cheep” for which they were also responsible, is one helluva pet hate of mine. Yet with sales of over five million by early 1972, they were obviously doing something right.  With lead singer, Sally Carr, the group represented the sound of early euro pop before Abba was fully established, and after researching this a bit more, unearthed that Abba’s writers Bjorn Ulvaeus and Benny Anderson claimed to be inspired by Middle Of The Road.  “Agnetha (blonde Abba with the surname Faltskog) covered two of our hits in Swedish before she joined Abba” Sally Carr told The Sunday Post in July 2018.  “And the two boys…on a live television interview, said that they used our sound as a guide for their sound.”  So there it is: credit where it’s due.

Other singles in the top ten included “Tap Turns On The Water” from C.C.S. (Collective Consciousness Society – fronted by blues man Alexis Korner);  Marmalade’s “Cousin Norman”; Hot Chocolate’s “I Believe (In Love)” and Shirley Bassey’s “For All We Know”.  Slotted in between these were The Supremes – the group that Diana Ross left in 1969 – with the inspiring “Nathan Jones”.  The trio’s sound changed of course, as Jean Terrell, with her distinctive warm, soulful voice, more than adequately filled Diana’s departing high heels.

Leaving music aside now, let’s talk about a pair of significant television programmes, both of which, proved to be so successful they could have lasted for ever.  The first changed family entertainment on the small screen – “The Generation Game”.  With its host Bruce Forsyth, the show debuted on BBC1 this October, where four teams of two people from the same family of different generations played several silly games until the winner was declared. Often the games included contestants getting soaking wet, covered in something sticky, or messing about with cake making and flower arranging, which invariable ended in disaster. The winner then had a date with the conveyor belt of prizes, including the obligatory cuddly toy!  “Didn’t they do well?” and “Good game, good game” were typical of Brucey’s catch phrases. At its peak, the show attracted twenty-one million viewers on a Saturday evening.

Larry Grayson was the second host, where viewing figures peaked at twenty-five million, as his exaggerated camp antics and comments like “What a gay day” and “Seems like a nice boy” delighted audiences and contestants alike.  Replacing this loveable figure was Jim Davidson, who didn’t really have any catch phrases. Well, any that could be broadcast during a family show at peak viewing time.  Several attempts have been made to resurrect the show with different hosts but they never passed pilot stage.

Over on ITV this month (or rather London Weekend Television) “Upstairs Downstairs” was also compulsive viewing and, incredibly, the series ran for sixty-eight episodes over five series.  Developed from an idea by Jean Marsh, who played head parlour maid, Rose Buck, it was set in a Belgravia town house, at 165 Eaton Place, with the Bellamy family “upstairs”, and their servants “downstairs”.  Set between 1903 and 1930, the series covered topics like the decline of British aristocracy and the changes in society like the Suffrage movement, the First World War, the Wall Street Crash and all that went on with the Roaring Twenties.  Telling these powerful stories were a handful of much-loved actors like the butler, Mr Hudson; cook, Mrs Bridges and her long suffering kitchen maid, Ruby.  Upstairs we were treated to Lady Marjorie Bellamy, her husband Richard and their two children Elizabeth and James, whose wife Hazel eventually took over the role as mistress of the house.  It was, as I recall, a truly engrossing series which combined social history with entertainment.

Anyway, that’s it for this time, and as I now plan to dig out my sou’wester  and wellies to protect me from the pouring rain to do a food shop, I thank you for your company and will bid you farewell until next month.   Slosh, slosh!