Hold on, we’re going back a decade this month into the fifties which will be a revelation on several levels with some interesting music that in a small way helped define the start of the sixties.  Having said that, the number one single this month in 1957 hardly set the world on fire although it did, ironically, have lasting qualities.  So who remembers Paul Anka’s “Diana”? 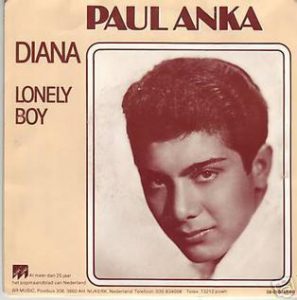 I’ve just played it on youtube and, ah, yes, it rings a bell. Just. The backstory about this song was Paul Anka had a crush on a girl named Diana who he had met in his church, so he put his feelings in a song, which went on to sell nine million copies globally, with 1.25 million in the UK alone. “Diana” stayed at the top for nine weeks to be replaced (eventually!) by The Crickets’ “That’ll Be The Day” which couldn’t be more different.

This Canadian/American all clean-cut Mr Anka enjoyed a super career as singer and entertainer and, as a songwriter, was responsible for Frank Sinatra’s “My Way” (which doubtless earned him a few bob along the way) and with Michael Jackson wrote “I Never Heard”, later recorded under the title “This Is It”.  This was the title of the 2009 docu/film of his rehearsals for the upcoming tour of the same name scheduled for kick off on 13 July.  The

film, single, album and tour were the means of Michael clearing his massive outstanding debts but, as you know, he tragically died eighteen days prior to the tour start date on 25 June.  He was fifty years old.   “Love Never Felt So Good” was another song Paul Anka wrote with Michael Jackson which eventually found its way on to Michael’s 2014 posthumous album “Xscape”.   Let’s move on to another smooth talker sitting at number two: Pat Boone.

Dating back to 1931 when it was recorded by Gene Austin, recognised as one of the first crooners, Paul Boone recorded “Love Letters In The Sand” twenty-six years later.  His version dominated the American singles chart for five weeks, but climbed no higher than two in the UK.  Oh, something silly – Pat did his own whistling on the single!  An all-round entertainer during the 1950s and early 1960s – there was nothing he couldn’t turn his hand to – he sold over forty-five million records, appeared in over twelve films and hosted numerous television shows.  It’s said his cover versions of rock ‘n’ roll originals helped the popularity of the music.  Maybe having Elvis Presley as his support act during a 1955 Cleveland, Ohio gig lends credence to that.  Who knows!  What is known, is that fortunes were quickly changed because Elvis had four singles in the UK top twenty this month.

Johnny Duncan nearly had me fooled.  While researching the single “Last Train To San Fernando” I inadvertently hooked up with a country singer by that name who, of course, wouldn’t have put his vocals to something like this single.  Ah hah – Johnny Duncan, the Bluegrass musician was more like it, particularly as he fell into the Skiffle category.  So, born in Tennessee, the right Johnny Duncan served in the US Air Force and was posted in Cambridgeshire during 1952.  He met and married a local lady, Betty, and to cut a long story short, replaced Lonnie Donegan in Chris Barber’s Dixieland Jazz Band.  (By the way, Lonnie had just crashed this month’s listing with “My Dixie Darlin'”)  Johnny stayed with the jazz band until 1957 when he got itchy feet to form The Blue Grass Boys where “Last Train To San Fernando” was their first release.  They went on to enjoy a couple more hits – “Blue Blue Heartaches” and “Footprints In The Snow” – and toured as add-on attractions with headliners like Cliff Richard. So that’s the top three sorted but there were a couple of anxious artists trying desperately to reach the pole position, but didn’t (although they didn’t know that at the time).  First was rock pioneer Charlie Gracie with “Wanderin’ Eyes”, the follow-up to “Fabulous”, a top forty hit.  Behind him was Harry Belafonte with “Island In The Sun” which, to all intents and purposes, deserved to go higher but stayed where it was.   The single was lifted from the film of the same name and, due to its bouncy, sunny sound, was re-born by other singers over the years, as well as being adapted for a children’s book in 1999.  Born in Harlem, Harry Belafonte moved to New York where his career as a singer helped finance his acting lessons.  I must confess that when I hear his name I think of the “Banana Boat Song” (you know, the Day-O Da-Day-O one) alongside his involvement in supporting the Civil Rights Movement (where, among many projects, he helped organise the March on Washington in 1963).  Then, of course, let’s skip a couple of decades to 1985 when Harry was a pivotal figure in the American version of Live Aid and the single “We Are The World” by USA For Africa.  This charity single was inspired by Band Aid’s “Do They Know It’s Christmas” the brainchild of Bob Geldof and Midge Ure following the horrific news coverage of starving people in Ethiopia.  Both singles resulted in supergroup performances from the very best in the music business, raising millions of pounds/dollars to help alleviate the suffering in an overseas country.  Today, Harry Belafonte is still a leading, influential figure in American politics and his work for human rights issues is legendary. 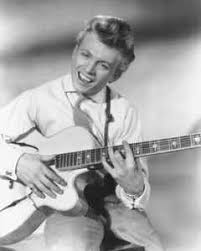 because Tommy Steele was in the top ten with “Water Water”;  The King Brothers were bubbling under the top twenty with “The Middle Of An Island”, while  Frankie Vaughan’s “Man On Fire” and Jim Dale’s “Be My Girl” were climbing slowly. Granted, not very exciting but at least the Americans didn’t have it all their own way!

Non-musical events this month included the introduction of a vaccine against the flu pandemic, Jodrell Bank Observatory being operational, and the government unveiling plans to allow women to join the House of Lords for the first time.  Also the 7th edition of the Miss World Pageant was staged in London’s Lyceum Ballroom, where the winner was Finland’s Marita Lindahl.  The UK was represented by Leila Williams who failed to figure in the top seven. These contests don’t sit comfortably with me, so will move on to the safer subject of bricks and mortar. Anyone who could afford to buy a house this month, usually a new-build with an inside toilet, would pay an average of £1,891 (around £65,000 today).  With an average weekly salary of £10 (£340) owning a home was, for some, an unreachable dream. 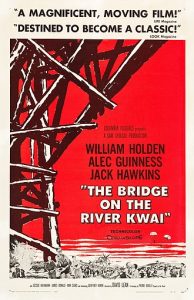 On to the movie front now, Bridge On The River Kwai was released this month.  This blockbuster went on to live across the decades and is one that a certain television channel is not afraid to screen on a regular basis.  In fact, I watched it for the umpteenth time last year yet the storyline still made compulsive viewing. With a cast that included many top names, including Jack Hawkins, Alec Guinness and William Holden, it was based on a Japanese prisoner of war camp overseen by a nasty-piece-of-work Colonel Saito who, towards the end of the film, began to show a more human side to his character. Against the horrific background of depravity and cruelty beyond comprehension, prisoners were ordered to draw up plans to construct a bridge over the River Kwai connecting Rangoon to Bangkok.

Directed by David Lean, the film was actually set in Sri Lanka which was an ideal location to re-create the environment needed: landscape and weather temperatures.  What a cinema triumph it was!  Not only was it one of the highest grossing films of 1957 but it enjoyed superlative reviews, like this one in Variety magazine – “It’s a gripping drama, expertly put together and handled with skill in all departments.”  It won every award going at the time and further ahead, in 1991, was voted the 11th Greatest British Film of the 20th Century by the British Film Institute. Mind you, on the downside, countless Japanese viewers disliked the way in which their race was depicted, particularly the implication that their military engineers were incapable of building a bridge!   Oh dear…..

On that note, I think I’ll finish for this month but will return with a visit to the 1970s next time. 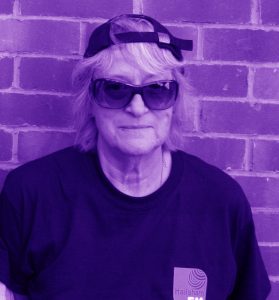