Somehow I always seem to gravitate towards the decade I loved the best.  Certainly it’s not true what some folks say that if you remember it you couldn’t have been there.  I was, and, although some parts are rather sketchy (through age) now, I can recall being totally immersed in the decade that defined our way of life, saying nothing of the impact it made on future music.  London was the place to be during what’s been called ‘the Swinging Sixties’ – although I don’t remember too much about the ‘swinging’ bit –  as it was the very heart of the cultural revolution spearheaded by the young.   “In a decade dominated by youth” wrote a journalist in Time magazine, “London has burst into bloom.  It swings; it is the scene.”  Before this turns into a history lesson, let’s concentrate on the music during November 1960….

Sitting at the top of the UK chart this month was one of the top selling singles of all time.  Recorded by Bill Porter in Nashville, in the key of E major and at a tempo of 80 beats per minute….hah, I’m 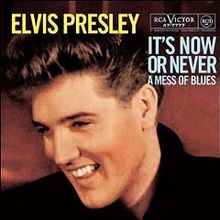 such a tease.  I’m talking about Elvis Presley with “It’s Now Or Never”, based on the Italian song “O Sole Mio”.  Interestingly, this was one of two versions of the Italian original: the other, titled “There’s No Tomorrow” was recorded in 1949 by American singer Tony Martin. And it was his version that Elvis heard while in the US Army stationed in Germany.  Aaron Schroeder and Wally Gold added English lyrics in half an hour to become the biggest song of their career.  And Elvis?  Well, after topping the American singles chart for five weeks, “It’s Now Or Never”  dominated British sales for an astonishing eight weeks, and an additional week at the top during 2005 on re-release.  All told, it’s estimated Elvis sold over twenty-five million copies of this little 7″ disc, his biggest selling international single ever, according to my reference book. Apparently, the song’s initial release was delayed due to rights issues, which allowed the song to generate huge advance orders.  Upon its eventual release, “It’s Now Or Never” shot to number one, without stopping on the way.  Not bad for a song that took thirty minutes to adapt.  As an aside here, “Big Bad Bass” Barry White, credited this particular song as an inspiration to changing his life around when, as a sixteen year old, he spent four months in prison for stealing $30,000 worth of Cadillac tyres. He turned his back on crime to concentrate on a singing career, which, as you know, he excelled at with his romantic image and bass baritone voice which spiralled us girls on to a higher love – with due respect to Kygo and Whitney Houston.

At number two, having been displaced from the top by Elvis, was Roy Orbison with a song described as expressing “a clenched, driven urgency”, but we know it as “Only The Lonely”.  Brenda Lee’s “I’m Sorry” prevented Roy’s single reaching number one in America.  Nicknamed “The Big O”, he was loved for his passionate singing style and his dark reflective ballads, and, of course, his performances where he was stoic on stage, wore black clothes to match his dyed black hair and dark tinted glasses – and he rarely smiled.   In 1987, when Bruce Springsteen inducted Roy into the Rock and Roll Hall of Fame, he explained that when he started recording “Born To Run”   “I wanted to make a record with words like Bob Dylan that sounded like Phil Spector, but most of all I wanted to sing like Roy Orbison.”   In actual fact, Bruce intended to kick off his album with an alarm clock followed by “Only The Lonely” playing over a radio.

At last, a single from an artist nearer to home – Shirley Bassey with “As Long As He Needs Me”.  The torch song from the musical Oliver!, Ms Bassey roared her way through Georgia Brown’s version when she played Nancy who fell in love with Bill Sikes, her criminal boyfriend. In the film version of the musical, Shani Wallis sang it.  Although Shirley’s powerhouse rendition stalled at number two, it was one of the biggest selling titles of the year, racking up thirty weeks in the chart.  As an aside here, when Sammy Davis Jr recorded it three years later, the title changed to “As Long As She Needs Me”.  Well, I suppose that makes sense.  The only other British acts in the top ten were Cliff Richard with “Nine Times Out Of Ten” (would you believe it…he’s eighty next year and planning another UK tour);  “How About That” from Adam Faith (the follow-up to “When Johnny Comes Marching Home”) and “Walk, Don’t Run” from The John Barry Seven. The British composer and conductor is probably best remembered for composing and performing scores for (a staggering) eleven James Bond films, spanning 1963 – 1987.  I think his first was “The James Bond Theme” for the first in the series starring Sean Connery as 007 in Dr No.

Then it was back to the Americans – Johnny and The Hurricanes’ “Rocking Goose”;  Bob Luman’s 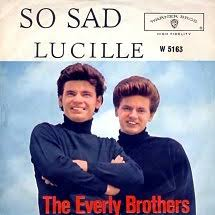 “Let’s Think About Living”, Johnny Burnette’s “Dreaming”, and the Everly Brothers with “So Sad/Lucille”.  Isaac Donald “Don” and Phillip Jason “Phil” Everly, epitomised America’s clean cut image in their Ivy League suits and squeaky clean personal life, as they scored hit upon hit during the decade, with their close harmony singing and steel string acoustic guitar strumming. I think it’s true to say, their music remains popular today, particularly “Cathy’s Clown” and “Wake Up Little Suzy”.   “We’re just pop music, but you could call us an American skiffle group”, the brothers once said.  Fair enough!

Away from the music, daily newspapers lent column inches to a London jury’s decision that Penguin Books hadn’t broken the country’s Obscene Publications Act by planning to publish Lady Chatterley’s Lover.  The decision paved the way for initial sales of three million.  The book, written by British author D.H. Lawrence, was initially privately published in Italy during 1928, and a year later in France, but it wasn’t until 1960 that an uncensored edition was available over here, whereas India, Australia, Canada and America banned it for its obscenity content, as it detailed an emotional and physical relationship between an upper class lady and a working class man.

Actually, to be more honest (and avert your eyes of you’re weak of heart), the author’s explicit descriptions of the sex act and the use of that four letter word (which I’m sad to say, seems to be an integral part of everyday conversation these days) raised a load of eyebrows in disgust and horror that sex should be written about so liberally.  Or as a friend of mine once said “I don’t mind doing it, but I don’t want to read about it.”

Briefly, the story – believed to originate from the author’s own unhappy domestic life –  told of a young married woman, Lady Chatterly, whose handsome husband was paralysed from the waist down following an injury sustained during the Great War.  Um, need to be careful here. With his limited physical abilities, his wife’s frustration led to her having an ‘energetic’ affair with their gamekeeper, Oliver Mellors, where, let’s say, she dominated him due to her upper class status.  And I think I’d better leave it at that, and move on to safer ground…… 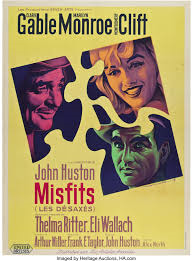 Across the Atlantic this month, the filming of The Misfits was completed and proved to be the last movie for both of its leading stars.  Clark Gable died from a heart attack on 16 November, and Marilyn Monroe died in 1962 during the filming of her uncompleted Something’s Got To Give.  Written by Arthur Miller, and directed by John Huston, the film was poorly received in 1961, yet, over the years, has earned respect as a significant milestone in both stars’ careers.  It’s ironic that Monroe should be teamed up with her childhood screen idol and had said she thought Gable was her father.  The film was a magical combination of outstanding Hollywood talent on the big screen which I, for one, have watched time again, being a lifelong fan of the blonde actress. Despite a tragic personal life, Monroe defeated the odds to become a sex symbol of the fifties and early sixties, but a defining actress first and foremost.  As Elton John sang in “Candle In The Wind”, his 1974 single release, –  “Your candle burned out long ago before your legend ever did.”  And, as you know, he performed a re-written version at the funeral of  Diana, Princess of Wales in 1997.

That’s me done for now, and I can only close with the same sentiments as I did in October, moaning about the pouring rain which is now bouncing off my office window.  Eight different coloured pigeons are clustered closely together on my bird table standing on the lawn outside, pecking up wet seeds while attempting to keep their feathers dry.