The public’s taste in music this month in 1961 was varied with home grown artists competing against American interlopers who had no intention of disappearing without a fight.  The Brits held their own and for the first time this year, it was a UK group who dominated record sales. 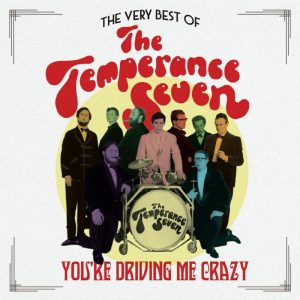 Specialising in 1920’s ‘style jazz’, The Temperance Seven was founded by students at the Chelsea School of Art during 1955.  It evolved into a nine-piece unit and although their music failed to keep my boat afloat, all credit to them for sitting at the top of the UK chart with “You’re Driving Me Crazy” in May 1961.  Their version of this popular American song was one of several, with an earlier take included in the musical comedy Smiles featuring Fred and Adele Astaire. Even the animated cartoon character, Betty Boop, sang a sexy version in Silly Scandals circa 1931.  The story goes that as the jazz age flapper sang, so her dress went on a walk down her body to reveal her lacy bra, causing Betty Boo to utter a scream.  As if that wasn’t all, part-way through her performance, a troupe of mechanical dancing penguins joined her on stage.  Curiosity got the better of me and have just watched the short, grainy black and white film on that channel. One of the funniest snap sequences concerned two members of the audience.  Go on…give it a go.  Will only take a couple of minutes, if that.

Anyway, I’ve digressed slightly.  Back to The Temperance Seven who fictionalised their history as being rooted in the Pasadena Cocoa Rooms, North London.  In 1960, they recorded “Ukulele Lady” with a vocal refrain from the wonderful Peter Sellers, a track on the 1960 album “Peter And Sophia” (Loren)  which appears to have been available again on CD in 2011.  Don’t you just love their “Goodness Gracious Me” and “Bangers And Mash”?  A bit dated now of course, but to this ol’ gal they still raise a smile.

“You’re Driving Me Crazy” was next, and audiences were invited to watch their light hearted performances, where they dressed according to the style of the music they played, which could range from a fez to a dog collar. When the single was released, one reviewer was prompted to write – “one of the strangest number one records…the world of dance orchestra pushed flippantly into the television age.”  Well, it certainly was different.  And as such, pushed The Temperance Seven into the spotlight where they continued to be popular as trad-jazz enjoyed a rersurgance – however temporary – before the new decade got much older, when they bowed down before The Beatles and all the groups that followed the Liverpudlian quartet, who crushed the present to define an unprecedented, and quite unprepared, exciting future.

Finally, we get to the single sitting at number two which couldn’t be more different – The Marcels with “Blue Moon”.  The multi-racial doo wop group was formed in Pittsburgh, Pennsylvania, during 1959. Named after the marcel wave, a popular ladies’ hairstyle in the twenties, when it necessitated using hot curling tongs (ouch!) to produce a curl in the hair.  For longer hair, ladies often tied it back at the nape of their necks, then secured it above the ears using a fancy hair pin to keep it in place. If this sounds like a cluttered explanation, check out a picture of actress and civil rights activist Josephine Baker as she perfected it!  Mel Torme and Billy Eckstine both enjoyed a hit single with “Blue Moon” in 1949, and since The Marcels’ release it’s been re-recorded hundreds of times by the likes of Frank Sinatra, Sam Cooke, Elvis Presley, and even by The Supremes, and our own Rodney Stewart.

Talking of Mr Presley, he sat under The Marcels with “Wooden Heart”, a song liberated from the soundtrack of his musical comedy G. I. Blues film, co-starring Juliet Prowse.  As you’ll probably remember, Elvis broke a million young girls’ hearts when he turned his back on music to be drafted into the Army, cutting a sharp figure in his uniform and shaved head. This was during 1958 and he was stationed in Germany.  While there, the script for the film was written, with some of the movie actually later being shot on location there. By all accounts, the Army provided some of its tanks and other vehicles for authenticity purposes. When Elvis was discharged and back in America in early 1960, he finished the film. I don’t actually remember it, but smiled when I read what one reviewer had to say – “I wouldn’t actually call Elvis sophisticated in the picture, but he’s grown up….”  While another penned this – “Gone is that rock and roll wiggle (and) that ludicrously lecherous leer..”  Just thought, didn’t Elvis sing the song to a puppet of some sorts? 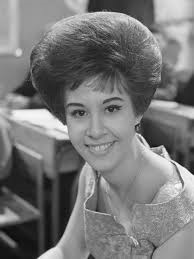 Ah, at last a British singer, Helen Shapiro with her first single “Don’t Treat Me Like A Child”.  Recorded at EMI’s famous Abbey Road Studios, the teenager was born in London’s East End.  Helen and her brother formed a skiffle group and performed at their local youth club. From here she joined Susie and the Hula Hoops, a school band that included a certain Mark Feld – Marc Bolan!  With her eye on the entertainment world, Helen took singing lessons at the Maurice Burman School of Modern Pop Singing, where she developed a mature, deep timbre to her voice, prompting listeners to believe she was much older than her years. It’s incredible to believe that Helen was a mere fourteen years old when she recorded “Don’t Treat Me Like A Child” which, of course, kick started an amazing career, elevating her to the position of the UK’s top female singer before her 16th birthday.

Must just mention this. Helen’s family couldn’t afford a record player, so she borrowed a neighbour’s one so that she could play her first single, but I’m sure, once the royalties trickled in (such as they were at this time) she could afford one of her own.  Maybe a hi-fi system at that!  “You Don’t Know” and “Walkin’ Back To Happiness” followed, and Helen’s expanding beehive hair style and successful future were guaranteed.

Things are looking up now because sitting in the top ten is a single that was one of the first I purchased back in the day.  It’s a bit of nonsense by today’s standards of course;  twee, rather childish but oh, so cute.  The Brook Brothers 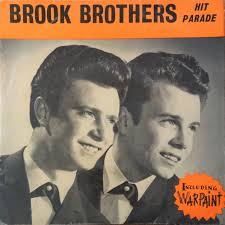 and “Warpaint”.  Geoff and Ricky, two British lads, won a talent show and record contract and went on to record “Greenfields” as their debut release, a big hit in….Italy!  Then came “Warpaint” which I’m not ashamed to admit that, decades later, became a must-play addition to my Hailsham FM Monday morning show.  Check out some of these lyrics – “With your lipstick, powder and paint, You’re all dressed up like a-what-you-ain’t….Can’t you see you’re not goin’ to fight a war, you’re only goin’ out with the boy next door…”  See what I mean?  Their only other single I can still hum unaided is “Ain’t Gonna Wash For A Week”, what a sad admission eh?

Anyway, rounding off, The Brook Brothers toured with Bobby Rydell and Cliff Richard at one point, and also made a cameo appearance in the 1962  It’s Trad Dad, Richard Lester’s first feature film.  A host of artists performed, adding little to the film’s storyline, including the before mentioned Helen Shapiro and The Temperance Seven, Craig Douglas, Acker Bilk, Kenny Ball, Chris Barber and Chubby Checker, bringing with them jazz, pop, rock and roll with a little bit of a twist thrown in for good measure.

Holding up the top twenty this month were American pop singer, Buzz Clifford’s “Baby Sittin’ Boogie” and The Everly Brothers (whom The Brook Brothers’ emulated) with “Walk Right Back”.  Adam Faith and Bobby Vee were a little higher with “Easy Going Me” and “More Than I Can Say” respectively.  Above them, Cliff Richard’s “Gee Whiz It’s You” and Craig Douglas’ “A Hundred Pounds Of Clay” slowly climbed into the top ten.

That’s moreorless sorted out the music for this month, so, I hear you asking – what about the clothes hipsters were wearing.  It was hard to track down  the styles as I couldn’t find anyone who had garments stashed away in their wardrobes (no, not even me!).   However, what about these then.  For the guys, slim fitting, single-breasted suits and skinny ties (pre-Sean Connery’s 007), fashioned in mohair or grey flannel.  Striped t-shirts, cardigans and pork pie hats. Back plunging necklines and armholes on all-purpose cotton dresses, belted at the waist, for the girlies.  Celanese fortel fabrics, smocking and cap sleeves, play-swim outfits, and two piece middy (yes!) dresses, all of which could, apparently, be made from Simplicity patterns. 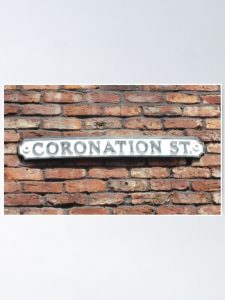 began its life as a wet sock and wasn’t expected to run past its planned thirteen episodes. However, television viewers quickly warmed to everyday Northern characters like Ena Sharples, Minnie Caldwell, Martha Longhurst, Annie Walker, Elsie Tanner and Ken Barlow. The television reviewer for the red top Daily Mirror wrote the series  was doomed from the start – “There is little reality in this new serial which, apparently, we have to suffer twice a week.”  I bet whoever wrote this felt bucket loads of egg on his/her face!

Such was the momentum of this unusual collection of characters that expanded over the years, and who became a part of the British way of life, Coronation Street was the country’s longest running soap by 2010.  Viewers were invited to share the lives of changing family members, revolving around kitchen sink situations, social commentary, through to hatches, matches and dispatches (some not planned), and loads of laughs, tears and misadventures.  Over the years, scripts have been written to include events in the ‘real’ world which have introduced a rawer edge to the soap;  a move criticised by many, who preferred it to remain fictional in a make believe world.  By 7 February 2020 Coronation Street screened its 10,000th episode, proving  producers and writers must be doing something right!  Apart from a couple of years during the seventies when I lived in London and had better things to do than sit before a television set of an evening, I’ve watched Corrie for the best part of my adult life.  And it’s on again tonight!