Dig out your beehive bonnets, “Continental Roll” collared checked shirts, coachman dresses and black bow shoes (with 7/8 inch heels of course) to tip toe back to the fifties,  the decade of ballads, some good, some not so, and I reckon May 1955 typifies this but I’ll try not to make this visit too boring.

Sitting at the top of the singles chart this month – Tony Bennett’s “Stranger In Paradise”, liberated from the “Kismet” musical.  First produced on Broadway in 1955, before moving to London’s West End and later a film, the story was set in a fictional Baghdad during the time of the Arabian Nights. His chart topper was one of the most popular versions recorded, and there were quite a few, including that by Tony Martin which was also in this month’s top ten listing. Do I detect a lack of original material at this time?  If so, we ain’t seen nuthin’ yet!   Aside from singing, Tony Bennett is also a noted painter, creating works under the name Anthony Benedetto.

Perez Prado’s “Cherry Pink Apple Blossom” sat at number two. Known as the ‘King Of Mambo’, this Cuban bandleader’s version of this popular French song, was one of two versions. The other, by UK trumpeter Eddie Calvert, was climbing fast.  In actual fact, both versions would later hit the top spot because, following ‘King’ Prado’s two week stay, Eddie’s trumpet stayed atop for a month.

Canadian vocal group, The Crew Cuts – named after the popular crew cut hairstyle at the time: what else!  – were vying for the top spot with “Earth Angel”.  The song, originally recorded by the doo-wop group, The Penguins, whose version, incidentally, was one of the first R&B songs to cross over into the American pop chart, would grow legs.  It was included in the soundtrack to “Back To The Future” starring Michael J Fox and Christopher Lloyd, playing Marty McFly and Doc Brown respectively. I think The Crew Cuts most famous track was “Sh-Boom” which they swiped from The Chords, another doo-wop outfit. Dog eat dog music world it seems. Tennessee Ernie Ford, sporting a cheeky moustache, was an all rounder in the entertainment business but was struggling in his climb up the chart with “Give Me Your Word”. His unpretentious sense of humour and bass-baritone voice is probably best remembered on “Sixteen Tons”, based on life in a Kentucky coal mine.  Or maybe not!

In May 1955’s single chart, only 14 records are listed, based on sales from selected record shops around the country.  Remember though, the very first chart was only published in January this year so sales figures were probably very hit and miss, yet gave an indication of who was selling what to whom, however tenuous.

So here’s the thing. Up to now we’ve had two singles recorded by two different artists. Now, we have three and the culprit is “Unchained Melody”. A little background first I reckon.  The song was originally penned as the theme for the little known prison film “Unchained” based on the career of Kenyon J Scudder, a former supervisor at Chino, the male-only prison in California. His book “Prisoners Are People” formed the basis of the script. Does anyone remember it?  Thought not!  Anyway, just outside the UK top ten, these three versions sat on top of each other, with Al Hibbler, who, prior to walking down the solo road sang with Duke Ellington’s  Orchestra, being the highest.  American singer Les Baxter was next.  According to his onscreen biography, Les developed his own style of middle-of-the-road music, known as exotica. Steady on, I thought, this is the fifties. So I researched further to discover ‘exotica’ was once described as ‘a combination of the South Pacific and the Orient’. Not what I expected at all, so instantly lost interest.  And finally, bringing up the rear – and much more down to earth – our very own Jimmy Young’s version. Singer and radio personality, Jimmy enjoyed a long and successful career, and attracted the support of legions of followers, including our Queen as she presented him with an OBE in 1979, a CBE in 1993, before knighting him for his services to broadcasting in 2002.  Not bad for the son of a baker and dressmaker. 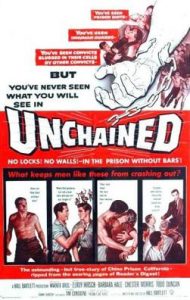 and Bill Medley, with Phil Spector as producer, released their take in 1965. This mighty powerful production is considered to be the definitive version which later slotted nicely into a film scene in the blockbuster “Ghost”, starring Patrick Swayze, Demi Moore and Whoopi Goldberg.  Forgotten what the scene was?  Let me jog your memory by saying, it was played over some strategically molded clay creation being fashioned by Demi on a whirling wheel, while Patrick looked over her shoulder.  Naturally, this scene, which some (not me naturally) claimed was a rising, albeit wobbly, phallic object, became widely parodied in several popular films like “The Naked Gun 2/ 1/2: The Smell Of Fear”.  “Ghost” was the highest grossing film of 1990.  Two other versions of “Unchained Melody” spring to mind.  Robson & Jerome enjoyed the best selling UK single of 1995 with it, while The Goons’ Spike Milligan and Peter Sellers recorded a parody of the song, produced by The Beatles’ main man George Martin.  However, EMI Records refused to release it for fear of a lawsuit from the song’s music publisher, so it remained dormant until 1990 when it was let loose on the world.

Obviously, “Unchained Melody” was one of the most recorded songs of the 21st century and was the only song to reach number one with four different recordings in the UK ……until it was joined by “Do They Know It’s Christmas?” in 2014.

In 1984, the super group Band Aid’s single entered the chart at the top, making it the fastest selling disc in British chart history, selling one million copies in its first week of release.  I’m sure you’ll remember the circumstances surrounding its release, but just in case, here’s the briefest of brief reminders. Bob Geldof and Midge Ure were moved to pen the song after seeing horrific television reports of the famine in Ethiopia.  Once done, they collected top-name British acts together in a studio where they recorded it in one day, and due to unprecedented media and public interest, the song dominated the chart for five weeks, generating a massive £8 million within a year of its release.  The song went on to be recorded a further three times in 1989, 2004 and 2014.  All were charity releases and chart toppers providing much-needed funds for famine relief, while the 2014 version raised money for the Ebula crisis in West Africa.

Up until the 1984 release of “Do They Know It’s Christmas?”, Wings’ “Mull Of Kintyre” was the biggest selling single of all time, until it was replaced by Elton John’s “Candle In The Wind 1997” released in tribute to Diana, Princess Of Wales, following her tragic death in the Pont de l’Alma road tunnel in Paris. You may recall he sang it, through his tears, at her funeral in September 1997 at Westminster Abbey, when two thousand people from all walks of life attended. Only a month before her death, Diana was seen comforting the singer at the funeral of their mutual friend Gianni Versace, the Italian fashion designer.

I digressed a little there, so let’s return to the May 1955 chart because smack in the middle was Doris Day with “Ready Willing And Able”, and as I started this blog, news came through of her passing at the age of 97 years. Doris performed this song in the 1954 film “Young At Heart”, and I believe Eve Boswell also recorded it but, apparently, messed up the lyric which resulted in her losing a rhyme.  I don’t recall either song (of course!) so have relied on somebody else’s greater knowledge here.

Actress, singer and animal welfare activist, Doris Day began her career during 1939 as a big band singer, before moving into the film world with “Romance On The High Seas” in 1948. Her twenty year career as an actress stretched across films of many genres – comedies, musicals and dramas.  Films like “Calamity Jane” where she played lead role opposite Wild Bill Hickok played by Howard Keel.  Flashbacks of Doris singing  “The Deadwood Stage (Whip-Crack-Away!)” spring to mind. You really can’t help slapping your thigh when singing it: at least I can’t.  “I was such a tom boy growing up, and she was such a fun character to play.” Doris told The Hollywood Reporter in a rare interview, a month before she died. “Of course, the music was wonderful too.  ‘Secret Love’ especially, is such a beautiful song.”  With James Stewart she starred in Alfred Hitchcock’s “The Man Who Knew Too Much”, while her best known films were probably those co-starring with her life long friend, Rock Hudson: “Pillow Talk” being one.  In both “Move Over Darling” and “The Thrill Of It All”, she starred alongside James Garner, but to be honest, she worked with some of Hollywood’s hottest and fittest stars – Cary Grant, David Niven, Frank Sinatra, Kirk Douglas, among them.

As a singer, she recorded her first hit “Sentimental Journey” in 1945, and went on to enjoy international success (including Britain) with singles like “Sugarbush”, “My Love And Devotion”, “The Black Hills Of Dakota”, “Love Me Or Leave Me” and a pair of UK chart toppers: “Secret Love” and “Whatever Will Be, Will Be (Que Sera, Sera)”. Despite her squeaky clean image manufactured by Hollywood’s publicity machine, Doris courted a certain amount of controversy in her personal life; being married four times certainly attracted unwanted media attention.

During 1971 she co-founded Actors And Others For Animals, appearing in newspaper adverts, alongside Angie Dickinson, Mary Tyler Moore and Jayne Meadows, denouncing the wearing of fur. Seven years later she founded the Doris Day Pet Foundation, now known as the Doris Day Animal Foundation, a non-profit charity with the mission of helping animals and the people who love them.  Running parallel to this is the Doris Day Animal League with the aim of reducing animal pain and suffering.  This later merged into The Humane Society Of The United States.  Then in 2011, she bank-rolled the Doris Day Horse Rescue and Adoption Centre in Texas to help abused and neglected horses.

“I’ve never met an animal I didn’t like.  I can’t say the same about people”  Doris Day once said.

We are delighted to tell you that we have decided to add a Community Corner to Cala Conversations. We will be featuring local charities and what they are doing within their area. We are starting […]