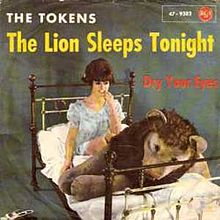 “In the jungle, the mighty jungle, the lion sleeps tonight”…that’s enough of that, as we take a leap across the decades from the fifties last month into the eighties now, where I have to admit, the March listing of singles is quite an eye-opener.  There’s heavy metal, instrumentals, British rock, a touch of soul, sing-alongs, and so on, and it was this month’s chart topper, Tight Fit’s “The Lion Sleeps Tonight” that suffered the Marmite effect.  You loved it, or you loathed it.  I’m afraid I fall into the latter category – it drove me crazy, crazy.

So, I hear you ask, what’s the meaning of “The Lion Sleeps Tonight”?  It’s a hunting song originally sung in Zulu under its original title of “Mbube” which means lion. Written during the twenties by the South African singer Solomon Linda, who later recorded it for Gallo Records during 1939, the song attracted loads of attention over the years.  I guess the most 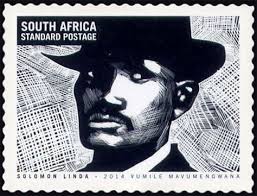 famous of all was a lawsuit between Linda’s estate (he died in 1962) and Disney, when it was claimed Disney owed $1.6 million in royalties for including the song in the film and stage productions of The Lion King.  A settlement was reached with Abilene Music Publishers (who held the global rights to the song and had licensed it to Disney) whereupon all song royalties were paid to the estate.

Moving on several years now, I reckon the first time I heard the song was by The Tokens, the American doo wop group.  This was around 1961 so it came and went having topped the American chart for three weeks and peaking at number 11 in Britain.  Then along came Tight Fit and as always there’s a back story to the single, so I’ll be brief. During 1981, record producer Ken Gold wanted to record a single featuring a medley of sixties’ music. This was the fun trend at the time with releases by the Dutch studio group Stars On 45, for example.  Masses of hit songs were re-created faithfully then seamlessly stitched together atop an underlying drum track, across singles and albums.  A huge success while the fad lasted.  Anyway, Ken Gold assembled a group of session singers to release “Back To The 60s” under the name Tight Fit. When the single’s sales warranted television exposure on shows like Top Of The Pops, Gold replaced the session singers with a group of singer/actors, with Robert Pereno and Lowri-Ann Richards to front it.  Later on in the year, record producer, Tim Friese-Green recorded “The Lion Sleeps Tonight” with a different set of session singers. Once again, as the single rose in the chart a new Tight Fit was formed to front that. This time, singers Denise Gyngell and Julie Harris, were joined by singer/dancer Steve Grant.  When the single hit the top, where it stayed for three weeks, they enjoyed an unexpected taste of success!   That’s enough of that, let’s move on.

Sitting at number two was American singer/choreographer Toni Basil with “Mickey”, and, guess what, there’s a bit of a story about this too. Penned by Mike Chapman and Nicky Chinn as “Kitty”, the song was first recorded under that name three years’ earlier by the pop group Racey, formed in Weston-super-Mare.  Oh, and Mike and Nicky went on to write hits for Suzy Q, Mud, The Sweet, among others.  So, Toni’s “Mickey”, with some adapted lyrics, bombed upon its first release, but the second time around it peaked at number two.  Patience paid off!  Just below Ms Basil –The Jam, with a song that couldn’t have been more different.  Lifted from their “The Gift” album, “Town Called 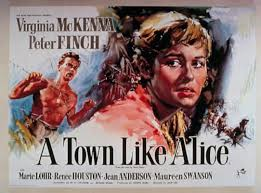 Alice”, hit the chart at the top then was replaced by Tight Fit.  The song’s title was a play on words from A Town Like Alice, the 1950 Nevil Shute novel, which, I’m sure you’ll recall was also a lovely 1956 British film.  Starring Peter Finch and Virginia McKenna, it was a truncated version of the book, yet became the third most popular British film of the year. However, The Jam’s composer and lead man, Paul Weller explained at the time of the single’s release, he hadn’t read the book but rather it was based on his hometown of Woking.  Doesn’t have the same right somehow does it?  Anyway, “Town Called Malice” racked up the group’s third number one, and their only serious hit in America.

Oh, and here comes the New Wave movement, with Haircut 100.  “Love Plus One” was the single, which one reviewer called “a nifty mover”.  Despite selling over 400,000 copies, it didn’t reach the top.  Nick Heyward and Les Nemes formed the band during 1980 and were probably one of the forerunners in this new music craze born from a combination of pop and punk music.  Off the top of my head, four other groups spring to mind – Duran Duran, Depeche Mode, Soft Cell and The Human League – and with the music these guys introduced a whole new slick style 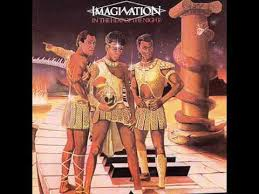 of dress.  And make- up!  I don’t know whether Imagination fall into the New Wave category, but their haunting “Just An Illusion” was a welcome addition to the lower rungs of the singles chart.  The trio, with front man Leee John, brought a new dimension to UK music with haunting, often snappy sounds which the public willingly embraced.  The guys dressed up for the occasion too, with exotic colourful styles in silk and cotton.  One time, they were slaves and Roman senators – so you get the picture.  “Just An Illusion”, their fourth single, was the follow-up to “Flashback”, a top twenty hit.

And talking of Romans, do you remember the Christian morality campaigner, Mary Whitehouse?  Well, this month she brought a case against the National Theatre of Britain over a stage depiction of a gay rape in The Romans In Britain. The chief witness in the case, who had been sitting at the back of the theatre, claimed in court, he glimpsed a penis being shown on stage.  In response, the defence counsel, insisted the witness could well have mistaken this for the actor’s thumb protruding from his fist.  The case was dropped – and I’ll say no more.

This really is a mixed musical bag this month.  Glancing down the top twenty we’ve got The Stranglers with “”Golden Brown”; Daryl Hall & John Oates and “I Can’t Go For That (No Can Do)”; “Senses Working Overtime” from XTC; “Cardiac Arrest”, Madness, and George Benson’s “Never Give Up On A Good Thing”.  Just entering the chart we see Gary Numan’s “Music For Chameleons”, Chas & Dave’s “Ain’t No Pleasing You” and “Layla” from Derek and the Dominoes.  Nobody could say music was samey but I mourn the lack of solid soul tracks, a situation that wouldn’t change for a time I fear.

A quick glance at this month’s films now.  The Spy Who Loved Me, the third to feature Roger Moore as 007, premiered on ITV, while John Mortimer’s play A Voyage Round My Father was adapted for Thames TV.  Across the Atlantic, Police Squad, a crime drama spoof, debuted as a television programme. It lasted a mere six episodes but introduced the character Frank Drebin, an inspiration behind those wonderfully hilarious Naked Gun trio of films,

with Leslie Nielsen playing the lead role.  To be honest, I’ve watched those films time and again, never got bored as I found I was laughing at things I’d previously missed.  Don’t get me started on Airplane!  and Airplane 11: The Sequel both starring the same funny man known as Leslie, because I was totally addicted.

OK, that’s me done for this month which, like thousands others, sees me isolated at home.  Writing is, of course, a solitary profession and I’m used to it,  but knowing I’m restricted in outdoor activities is gradually taking its toll.  However, it really is a very small price to pay for keeping safe and well.  We will get through this, but until that sunny day arrives, please take the greatest care each and every one of you.