We’ve skipped back a decade this month, so hold on to your precious vinyl as we change into our bell-bottom trousers, platform shoes, mini skirts or hot pants, and slap glitter across our brightly-coloured satin clothes to adopt the androgynous style that typified the age.  So that’s set the scene for the ‘no rules in fashion’ era which, in hindsight, probably applied to the music as well!

However, heavy competition was pushing forward to steal the glam rockers’ crown. The Faces were elbowing their way upwards with “Cindy Incidentally”, and Thin Lizzy were on their tails with their breakthrough song “Whiskey In A Jar”, originally recorded as the flipside to “Black Boys On The Corner”.  It was also a time of change for the Faces as Ronnie Lane played his last show with them at London’s Edmunton Sundown.  And it was a brave (or foolish?) man who takes on an original Phil Spector production, but Dave Edmonds did just that with “Baby I Love You”, his version of Spector’s sweethearts, The Ronettes’ global hit.   Another group flying the glam rock flag were Sweet, with Brian Connolly as lead vocalist.  Their rousing “Blockbuster” patiently waited to take over the pole position, a spot they would eventually grab for five weeks. The Partridge Family and The Detroit Emeralds were just below but within a flash, both groups realised their singles would stall because Elton John stormed into the top ten with “Daniel”.  Elton’s writing partner, Bernie Taupin, had read an article about a Vietnam War veteran who had been severely wounded, and simply longed to escape the attention he attracted when he returned to his Texan home.  In the Two Rooms tribute project, Taupin said that it was the most misinterpreted song they had written.  “They lauded him when he came home and treated him like a hero. But, he just wanted to go home to the farm…to get back to the life he’d led before.  I wanted to write something that was  sympathetic to the people that came home.”  Remarkably, “Daniel” only reached the top four but went on to win the 1973 Ivor Novello Award for Best Song Musically and Lyrically, among other prestigious honours. 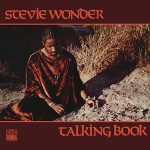 Newcomers to the top twenty were Motown’s Jackson 5 with “Doctor My Eyes”, and Stevie Wonder with a huge slice of soul/funk titled “Superstition”, the lead track from his 15th studio album “Talking Book”, which was sandwiched between “Music Of My Mind” and “Innervisions”.  Showing the singer wearing a velvet kaftan, Indian jewellry and cornrows on the cover, “Talking Book” was released following his 1972 American tour with The Rolling Stones, and went on to win three Grammy awards: Best R&B Song and Best Male R&B Vocal Performance – “Superstition”; Best Male Pop Vocal Performance – “You Are The Sunshine Of My Life”, the album’s opening track.

Holding up the top twenty was another American of considerable note, namely, Chuck Berry with “Reelin’ And Rockin’”, originally recorded in 1957 as the B-side to “Sweet Little Sixteen”, and follow-up to “My Ding-A-Ling”, where the lyrics exercised the double entendre in that a penis could easily be substituted for the ‘silver bells hanging on a string’, a toy given to the singer by his grandmother. If ever an artist lived a checkered life then this pioneer of rock and roll won on every count.  And I’ll leave it at that….for now. 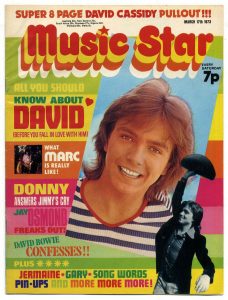 solo material.  Jimmy had just vacated the top spot with the somewhat infuriating “Long Haired Lover From Liverpool”, while Donny’s re-make of the Johnny Mathis song “Twelfth Of Never” sat comfortably in the top twenty.  His first solo outing was, by the way,  “Sweet And Innocent”, and with titles like “Go Away Little Girl” and “Puppy Love”, Donny was soon propelled into a mega-selling teen idol.

Other musical events of note this March included The Rolling Stones benefit concert for Nicaraguan earthquake victims raising $350,000, while Mick Jagger’s request for a Japanese visa was rejected because of a 1969 drug conviction, squashing the group’s plans to tour Japan. Mike Oldfield’s revolutionary “Tubular Bells” album was the first title on Richard Branson’s newly launched Virgin label, and EMI Records released Queen’s debut album. “The Concert For Bangla Desh”, a live triple elpee package, was hailed as album of the year. Produced by Phil Spector and George Harrison,  who also performed alongside Bob Dylan, Eric Clapton, Billy Preston and Ringo Starr, among others, was an Apple Records’ release.  Closely behind this was Pink Floyd’s

remarkable “Dark Side Of The Moon”, one of rock music’s landmark albums, and revered as one of the greatest releases of all time, selling a staggering 45 million copies. And finally, David Bowie was the first rock artist to perform at Earl’s Court Exhibition Centre, but shocked his audience at the Hammersmith Odeon when he announced he had ‘retired’ Ziggy Stardust, his stage persona, at the close of his British tour.

Anyway, Cliff Richard represented the UK in the 18th Eurovision Song Contest and finished third with “Power To All Our Friends”.   Even though – and I don’t wish to offend anyone – I feel Eurovision is a waste of time, energy and money, thought a little research might not go amiss.  With your permission, here’s what I discovered. The very first Contest was held on 24 May 1956 in Lugano, Switzerland, where seven countries participated, each submitting two songs each. That didn’t last long then did it?  The host country Switzerland won it with “Refrain” by Lys Assia, which was the only time a Swiss contestant walked away with the prize and promises of greatness,  as the country’s other winner, Celine Dion, is, of course, French-Canadian.  Eurovision, held primarily among the member countries of the European Broadcasting Union, grew in popularity and by 2018 over fifty countries were eligible to compete, with Australia allowed as a guest entrant.  Winners aren’t actually guaranteed long-term success unless, of course, they were named Abba, Bucks Fizz or Ms Dion. However, the hype, razzmatazz and international exposure, ensured participants enjoyed five minutes of fame on a global stage.

So, I hear you ask, how many times has the UK won?  Five, with Sandie Shaw’s “Puppet On A String”; “Boom Bang-A-Bang” from Lulu; Brotherhood Of Man’s “Save Your Kisses For Me”; “Making Your Mind Up” and “Love Shine A Light” from Bucks Fizz and Katrina and the Waves respectively.  I always thought Cliff Richard’s “Congratulations” was a winner too but not so.  He was beaten by one solitary point!  Fifteen times the UK finished in second place, and, apparently, still holds the record for the longest running string of top five placings.

So, to this year, when Eurovision celebrates its 64th year and is scheduled to take place in Tel Aviv (following Israel’s win last year in Portugal) on 18 May, following two semi-finals beforehand.  As you’ve probably guessed, I won’t be watching as politics override the quality of the music, and when personal opinions of the judges come into play, voting for their favourite countries.  Plus the grief and embarrassment that follows when, as in past years, the UK gets annihilated.   Perhaps a little unfair of me, but, hey, I  do wish the UK all the best this year and would like to believe we could actually walk away wearing the Eurovision crown with pride.  We’ll see.

And on that note, will leave you to bask in the glorious sunshine, with, I hope, a glass of wine in one hand and a packet of crisps in the other.