Aping around during this recent lockdown wasn’t on my list of boxes to tick. As you can guess there were things that demanded attention but after flicking the duster around and re-arranging the book shelves, the novelty soon wore off.  So in between gardening unless the weather was too hot or too wet, I watched more films than I’d normally do, and one of these was Planet Of The Apes.  I’m not awfully sure why I did this because I found the whole series of films rather disturbing in a strange sort of way.  This 1968 film starring Charlton Heston and Roddy McDowall (who, to be fair, enjoyed quite a lucrative career dressing up in an ape suit) gave us the storyline of some astronauts crash landing on a strange planet which, on first sight, appeared desolate.  Ah hah!  Not so, lurking unseen was a colony of apes that had evolved into human-like creatures with a high intelligence and, lo and behold, they spoke English.  A weird story evolved, of course, but what remained etched in my mind was the remains of the Statue of Liberty protruding from the waves along a shoreline.  Thus confirming the planet wasn’t alien at all but rather what remained of our dear Mother Earth after a nuclear war.

All this preamble leads me to Conquest Of The Planet Of The Apes which premiered in June 1972, the fourth in the series, where, this time, a space-borne disease wiped out cats and dogs, whereupon apes became pets, or rather slaves, to their owners. One reviewer tagged it – “a self-contained allegory in which man’s cruelty to beasts comes symbolic of man’s inhumanity to man.”  I remember the film was awful to watch despite the light at the end of the tunnel.  A fantasy for sure, yet smacked of some reality.  Oh dear, let’s move on to something more pleasant. Music!

Sitting at the top of the singles chart this month was “Metal Guru”, written by T Rex front man Marc Bolan. It was 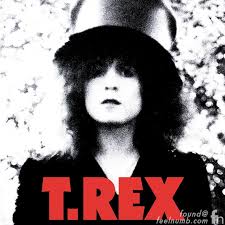 their fourth and last chart topping title.  Marc’s lyrics had always been open to debate, not in a nasty way, but often due to their ambiguity, childlike charm and fairytale quality, all written in his spidery handwriting. Of “Metal Guru” he explained it highlighted God, although he had no religious beliefs. “It’s a festival of life song…I thought how God would be, He’d be all alone without a phone.”  That doesn’t sound as bizarre as it reads as Marc had a dislike of phones.  To this end, he allocated certain codes for people to ring him at specific times, otherwise he’d ignore the ringing tone. In the passing years, I’m darned if I can recall what my code was.  I spent a fair amount of time with Marc and Gloria, his partner and mother of his son, Rolan.  In fact, it was through Gloria that I met him in an office at his record company.  A story for another time methinks.  Anyway, I used to hang out a lot with Gloria – the girls about London town during the seventies – as she drove us around in her trusty purple mini which, of course, would tragically kill 29-year old Marc in 1977. He, like me, wasn’t a driver, so relied on her and chauffeurs, who drove those big shiny, flashy limousines that you could actually live in if you wanted to.

Born Mark Feld, he was the forerunner of the British glam rock movement; was a multi-talented composer, guitarist and entertainer. Although the total flamboyant showman in the public eye, privately Marc was painfully shy outside his small circle of close friends. When he popped by my small flat in Bayswater, London, I needed to turn off my gas fire as it affected his makeup: didn’t stop him demolishing my gin though!  Thankfully, I was a brandy drinker in those days. I reckon we all have an everlasting image of Marc Bolan – feather boas, top hats, ostentatious brightly coloured clothes (and not confined to stage appearances either), loads of glitter and make up tastefully applied, and, most importantly, a rainbow of inspiration for many musicians, including David Bowie.  Yet, the elf like young man was happiest, sitting cross legged on stage, strumming his guitar. 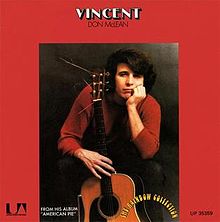 Sitting at number two, we leave the fantasy world of Marc behind for the reality of history with “Vincent” from American singer/composer Don McLean. The singer took his inspiration for the song after reading a biography of the post-impressionist Dutch painter Vincent van Gogh, and studying his painting The Starry Night.  This led to a ‘light bulb’ moment because he realised he could write a song about the painter through the actual painting.  However, Don McLean may well be better remembered more for his 1971 single “American Pie”, considered to be a “cultural touchstone”.  From an early age, Don decided folk music was his calling, yet he was rejected seventy-two times by record companies until a newly-formed Mediarts Records signed him. This label was later bought out by the giant (by comparison) United Artists, where his “American Pie” album was released during 1971.  The rest they say, is history.  Oh, “Vincent” did reach the top of the British chart, replacing “Metal Guru”.

Lindisfarne was at number three with a track liberated from their debut album “Nicely Out Of Time”, titled “Lady Eleanor”.  It missed the charts on its first outing, but on re-release became their second consecutive hit after “Meet Me On The Corner”. Not a group I remember clearly I’m afraid to say, but their distinctive close harmonies with a nifty touch of mandolin as an added attraction, “Lady Eleanor” begged to be a hit.  Once again, there’s a dash of historical inspiration behind the song as it was born from the short story The Fall Of The House Of Usher by American poet and writer, Edgar Allan Poe, a particular favourite of John Lennon as well.  Rounding off the top ten here, were Elton John’s “Rocket Man” (and my how that title grew legs!);  The Drifters with “At The Club”/”Saturda

y Night At The Movies”; teen idol David Cassidy’s “Could It Be Forever” and his rival little Michael Jackson, sporting an Afro bigger than his lithe body, with “Rockin’ Robin”.  I never realised – hang your head in shame Davis – that Michael’s take was from the previously released “Rock-In Robin” by Bobby Day in 1958.  Interestingly, for lovers of facts and figures, as the song’s owners failed to renew the copyright, it remains in the public domain.

Across the Atlantic now where a trio of mega stars were out on the road, playing to heaving audiences.  The Rolling Stones kicked off their North American tour in Vancouver, Canada, while Elvis Presley was locked into four concerts at Madison Square Gardens, New York City.  Following this, at a campaign benefit for the Democratics, Simon and Garfunkel reunited to join Dionne Warwick, Peter, Paul and Mary and others at the same NYC venue.  Of the groups that split up this year, Creedence Clearwater Revival, The Velvet Underground and Jefferson Airplane hung up their microphones.  On the other hand, The Jam, Steely Dan and Abba were formed.  Guess which one was the most successful!

Two years ago we bid farewell to the Queen of Soul.  Thankfully her heart warming legacy of music lives on and on and…….   None more so that the live album recorded at Los Angeles’ New Temple Missionary Baptist Church, titled

“Amazing Grace”.  It sold over two million copies in America alone, marking one of the biggest grossing albums in her career, and winning Aretha the 1973 Grammy for Best Soul Gospel Performance,   Soul fans will know the event was filmed for a docu-concert.  However, complications to release the movie in 1972 led to the reels of film being stored away indefinitely.  Much time passed, and cutting a long story short, the film was dusted down and ready to roll in 2011.  This time, Aretha sued the producer, Alan Elliott, for using her likeness without her permission. “Justice, respect and what is right prevailed and one’s right to own their own self-image.”  The litigation continued until agreement was finally reached, and Amazing Grace was finally premiered in November 2018, three months following Aretha’s passing. What an experience that was too; seeing the Queen at her best, with the Southern California Community Choir accompanying her.   It was just a pity that so few people turned up to watch the film at my local cinema, yet huge respect (no pun intended) to the manager for screening it.

As I’m typing this on the hottest day of the year so far, would you believe it if I wrote my keyboard is growing hotter by the second?  Thought not.  So, how’s about this….to cool me down there’s a large glass of something cold waiting for me?  Thought so.  Before I head for the fridge though, it’s been great being with you again and hope you’ll join me next month.  There might be an easing of the lockdown now, but do please continue to take the utmost care out there.