Hold on to your vinyl as the time machine is racing back over the decades to the sixties, that decade that holds so many thrills for those of a certain age – yup, that does include me!  And I’m not afraid to admit it when the occasion arises.

Sitting at the top of the chart in July 1964 was Roy Orbison with the somewhat dramatic “It’s Over”, holding off home-grown Brian Poole (without his Tremeloes)  and The Swinging Blue Jeans with “Someone, Someone” and

“You’re No Good” respectively. In fact, in the top ten, the British were holding their own for once with the presence of Cilla Black’s “You’re My World” (the follow-up to her cover version of Dionne Warwick’s classic “Anyone Who Had A Heart”, the biggest selling single of the decade by a female artist), The Bachelors’ “Ramona”, from the film of the same name, and the popular duo Peter and Gordon with the Paul McCartney penned “Nobody I Know” which followed their debut hit outing “A World Without Love” penned by Lennon & McCartney.  Now breathe…long sentence Davis!

However, probably the most interesting single of all was from The Animals, with Eric Burdon’s rasping lead vocals igniting a heavy blues feel to “The House Of The Rising Sun”.  Interestingly, the song was originally a traditional folk song telling of life going haywire in New Orleans, so the British group transposed the song’s narrative to the viewpoint of a woman suffering a life of degradation on several levels.  While on tour with Chuck Berry, The Animals used the song as their closing number to differentiate themselves from other rock ‘n’ roll acts on the show. Such was the overwhelming audience reaction that they recorded it to crash into the British and American singles chart at the top; other countries followed, cementing the song as The Animals’ signature tune to this very day.

The American contingent in this month’s top ten were as different as chalk and cheese: “Hello Dolly” from Louis Armstrong and “My Guy” courtesy of Motown’s first lady, Mary Wells.  The title song from the musical of the same name, “Hello Dolly” was first sung by the much-loved entertainer Carol Channing in her role as Dolly Gallagher Levi in the original Broadway cast.  On the other hand, “My Guy” was one of the sweetest ballads written by Smokey Robinson to tell the tale of a woman rejecting her boyfriend’s sexual advances while pledging her fidelity. Complicated?  No, not really, just a little confusing. Anyway, it was Mary’s biggest ever hit, later growing into an international Motown anthem and is as popular today as was decades earlier.  Then there was the oh-so-handsome P J Proby with his pony tail and splitting pants.  “Hold Me” was vocally exciting in the extreme but hit the spot because with this, and songs like “Maria” and “Somewhere”, he was still working decades later although the mentioned singles were sung in a much lower key!

I’m thinking the most exciting event in July was associated with The Beatles – their film “A Hard Day’s Night”.  Beatlemania was at an all time high and as John, George, Paul and Ringo couldn’t be everywhere at once, making a film was the obvious answer.  And, of course,  their millions of fans could watch their idols over and over on the big screen; screaming and crying if they felt like it, which, I believe, happened in most cinemas at the time.  On a lesser scale that still happens now. I recall watching “Mamma Mia” in a local cinema and when the film ended, the audience stood up and clapped! What the hell for? “They can’t hear you” I cried out. “It’s a film”.  Then it was patiently explained to me that it was a public way of expressing personal enjoyment and not necessarily aimed at the actors.  “OK – if it feels good, do it” I conceded.  Let’s return to safer ground with The Beatles… 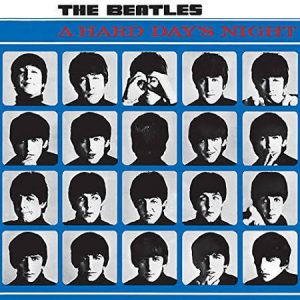 “A Hard Day’s Night” portrayed thirty-six hours in the life of the group, which, as you can imagine, was total mayhem and involved a lot of running away from hoards of over enthusiastic fans, particularly when racing to board a train.  Alongside the magic of the music – “Can’t Buy Me Love”, “All My Loving”, “She Loves You”, “I Should Have Known Better” – the story tells of problems with Paul’s grandfather, played by Wilfrid Brambell from the tv series “Steptoe And Son”; the group escaping from their hotel to party rather than answer fans’ letters, only to be caught by Norm their manager, played by Norman Rossington. The storyline was ridiculously lightweight, as one antic followed another; rehearsals, televised performances, goofing around backstage, and Ringo Starr going on walkabouts, while the other band members frantically searched for him, being part of the plot.  All very silly, but great fun,  and the ideal vehicle to placate the millions of fans desperate to see their singing idols.  Other actors included Victor Spinnetti, Lionel Blair, David Janson, and the uncredited Phil Collins, Charlotte Rampling and Patti Boyd, whom George Harrison met for the first time on the set and married within eighteen months.

Needless to say the black and white film was a huge financial and critical success: forty years after its release Time magazine ranked it as one of the all-time great 100 movies, and during 1999 the British Film Institute rated it the 88th greatest British film of the 20th century.  Here’s a few more slices of information, just in case it’s held your attention.  “A Hard Day’s Night” was premiered before 1,200 ticket holders at London’s Pavilion Theatre on 6 July 1964, the day before Ringo’s 24th birthday, and the soundtrack hit the streets four days later. So in demand was the film that 1,600 prints were in circulation simultaneously.  In some other countries it was re-titled “Yeah, Yeah, Yeah” for some reason.  Following the soundtrack’s release, an EP (extended play) disc was issued to maximise the music’s selling potential.  Titled “Extracts From The Film ‘A Hard Day’s Night'”, the four tracks included “If I Fell” and “Tell Me Why”. By now, the film’s title had hit the top of the singles’ chart where it stayed for three weeks after kicking off “It’s All Over Now” by The Rolling Stones.  Instantly recognisable from the opening chord played by George Harrison, the actual lyrics for “A Hard Day’s Night” were dashed off by John Lennon on the back of a birthday card a fan had sent his son Julian during a short taxi ride to Abbey Road. Once ensconced in the world famous studio, it was decided that John should sing the bulk of the song, except the bridge, where Paul took over because John couldn’t reach the notes.  By all accounts, the song was done and dusted within three hours!  As an aside here and 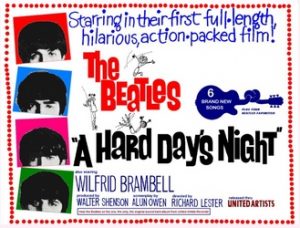 totally unrelated – “A Hard Day’s Night” was the wake-up music for three space shuttle missions, while Peter Sellers recorded a comedy version in which he recited the lyrics in the style of Laurence Olivier in “Richard III”.  A terrific listen, bringing a whole different dimension to the song which The Beatles themselves loved.  So did the record buying public as sales elevated Peter’s version into the top ten during 1965.

And finally, Ringo Starr is to blame for the quirky film’s name, as he told DJ Dave Hull in 1964 “We went to do a job, and we had worked all day …and all night. I came up still thinking it was day, I suppose, and said ‘it’s been a hard day’. Then I looked around and saw it was dark, so I said ‘night’. So we came to ‘A Hard Day’s Night'”.  Also the same year,  John Burke’s novel of the film was published. Based on Alun Owen’s screenplay, the book cost two shillings and sixpence (roughly £3 today) and, was, by all accounts, the first book in the English language to include the word ‘grotty’ in the text.  That’s it!

Another British film soundtrack was also issued this month – “Wonderful Life” from Cliff Richard with The Shadows; their third soundtrack (after “The Young Ones” and “Summer Holiday”) and Cliff’s eleventh album overall.  Unlike The Beatles, this soundtrack wasn’t crammed with singles. Unless I’m going crazy I can only find a solitary title “On The Beach” which was a top ten hit, while The Shadows released “Theme For Young Lovers” , a non-charter.  The actual soundtrack peaked at number two and was a marked decline from their previous soundtrack “Summer Holiday” which dominated the pole position for a staggering fourteen weeks.  The film’s plot was another flimsy, almost transparent,   experience, but. who cared.  Cliff Richard is a waiter on a travelling ferry with The Shadows his travelling companions. There’s a power outage on board and the group of misfits are fired on the spot. Stranded on a small boat with their instruments for company, they eventually reach the Canary Islands. Another series of silly romps follow involving camels, a woman wearing tartan, film crews, photographers and a certain amount hide and seek with the bad guys. It’s nonsense but huge fun.  Susan Hampshire is Cliff’s leading lady, and familiar faces included Richard O’Sullivan, Melvyn Hayes, Una Stubbs and Gerald Harper.  However, the general consensus appeared to be that, despite starring Cliff, this country’s biggest selling teen idol, “Wonderful Life” wasn’t a patch on its predecessors, yet, like Beatles’ fans, his adoring young public clamoured over each other to stare adoringly at the big screen.

Fan worship! Ah, I remember it well because – as I’m often reminded – as an hysterical, dewy-eyed teenager I wet my knickers during one of The Rolling Stones’ concerts in Brighton.

I’ll be back next month, hysteria permitting.