Welcome to my first blog of the new decade!

Although Christmas seems a long way off now, I do hope you had the best time and that your celebrations were carried over to New Year’s Eve  to greet 2020 with open arms.

This time we’re headed for the first month in 1980 and the album track “Another Brick In The Wall”.  Pink Floyd’s 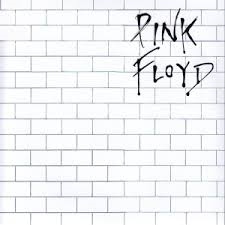 “The Wall” had been released the previous month; a rock opera written by the group’s bassist Roger Waters.  Its story line explored the antics of a jaded rock star Pink, and his self-imposed isolation from society which was symbolised by a wall.   Pretty heavy stuff eh?  Apparently, Roger modelled Pink on himself and former group member, Syd Barrett – co-founder and original lead singer – and during the recording of the actual album, the band was fractured by financial and personal issues, so “The Wall” was the last to feature Floyd as a quartet. However, that didn’t prevent the project soaring to extra ordinary global success, by selling a staggering 24 million copies, earning it the honour of being one of the top-selling albums of all time. It was also adapted as a film in 1982. Anyway, as usual I digress, so back to the single “Another Brick In The Wall”.

The extracted single hit the top of the chart this month as a three-part protest song about unbending school rules and practices, particularly those applied in boarding schools. Attacking a system as sensitive as schooling, naturally attracted unwanted attention.  For instance, Margaret Thatcher, then Prime Minister, loathed it and said so in print, while The Inner London Education Authority declared the song was ‘scandalous’.  An unexpected inclusion of a children’s choir was a subtle, yet significant, move, in a song that some believed to be unmusical, or border-line boring.  Can’t please everyone I guess.  However, Alun Renshaw, head of music at the Islington Green School, where the choir was recorded, said at the time “…I thought the lyrics were great – ‘we don’t need no education, we don’t need no thought control’…I just thought it would be a wonderful experience for the kids.” Margaret Maden, the School’s head teacher, on the other hand, failed to share Alun’s enthusiasm – “I was only told about it after the event, which didn’t please me…”.    Ooops!

Rounding this off now, two things come to mind.  By way of thanking the School’s children, they each received a copy of the single and album, plus tickets to a Pink Floyd concert, while the School itself received a £1,000 donation. And talking of  Pink Floyd concerts, I remember attending one at Wembley Arena back in the day, although typing this now, it seems like yesterday.  The music bashing out from the stage was soooo loud, my ears were ringing, my eyes bursting (no, not really) and the audience seats vibrated with the unmerciful, unrelenting beat.  In fact, everything shook to the beat which was most disconcerting.  So much so, I left part-way through the show and it took a large brandy to return me to normal!

From a heavy rock band to Sweden’s blue-eyed sweethearts of song – Abba with “I Have A Dream”.  Now sitting at number two, following its pole position over the Christmas period of 1979, the track was liberated from “Voulez-Vous”, their sixth studio album. Once again, a children’s choir was prominent in the song but this time from The International School Of Stockholm.  I think “I Have A Dream” was the first to include voices other than those of the actual group, although that’s not carved in stone. Released in a fabulous, deluxe sleeve, the single was intended to be a souvenir for fans who went to their Wembley concerts, which was a rather nice touch. For anyone who has been to one of their concerts will have been thrilled to pieces to be a part of the Abba experience. They were everything live as they were on record; musically perfect, dance routines impeccable, all smiling and twee, and visually stimulating. Audience interacted, however, was stilted which, in hindsight, added to the overall 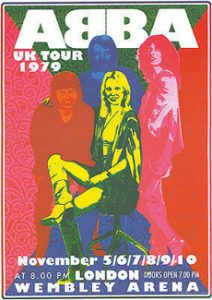 attraction of being in their very presence.  Those fans who were unable to get tickets to their UK dates, didn’t miss out entirely because Abba In Concert captured their November 1979 Wembley performance for the cinema screen.  Having a close friend at CBS Records (the group’s record company) I was invited to the premiere of the film in London.  Walking down the red carpet into the cinema was a tremendous thrill for this unashamed fan.  Then, when I realised Abba were also attending, I spent as much time looking behind me to see them as I did watching the film!  Audience interaction this time was zero.

In this pot pourie of a chart, sitting at number three was a novelty single (well, there had to be at least one) which I recall not at all.  “Day Trip To Bangor” by Fiddler’s Dram. This one-hit wonder folk group and their non-offensive, simple song actually attracted a bit of back-biting.  You won’t believe the reason why.  The group let slip that the song was actually inspired by a day trip to Rhyl, another North Wales’ town, but as Bangor rhymed better with the lyrics, they changed the title of the song.  I can hear you say, does it matter?  Well, to the Rhyl councillors and businesses it did because they bleated on they had missed out on a tourism opportunity.

And talking of Tourists (!), the group was in the top ten with “I Only Want To Be With You”, with lead singer Annie Lennox tackling the Dusty Springfield original.  The Pretenders’ “Brass In Pocket”; Sugarhill Gang’s “Rapper’s Delight”; “Walking On The Moon” from Police, and The Three Degrees’ “My Simple Heart” were among the elite hanging on to the chart’s higher positions. 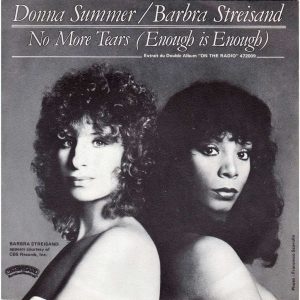 Climbing and jumping around January’s listing was disco queen Donna Summer’s duet with Barbra Streisand titled “No More Tears (Enough Is Enough)”. Now here’s a thing.  The song was included on Streisand’s “Wet” album and Summer’s “On The Radio: Greatest Hits Volumes I & II”.  So, in the UK, the 7″ single was released by Casablanca (Donna’s record company) while the 12″ version via Columbia (Barbra’s company).  The combined record sales passed two million in America alone, so it’s anyone’s guess what the global total was.  Also, they never performed the song together on stage.

Another hopping around was The Moody Blues’ heartfelt story of love titled “Nights In White Satin”.  Group member, Justin Hayward said at the single’s release – “It was a very personal song and every note, every word in it means something to me.  I found that a lot of people have felt the same way about it.” With lyrics befitting a romantic poem, and with an introduction by The London Festival 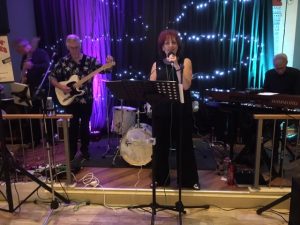 Orchestra, the single represents one of the most endearing sounds of the decade.  As an aside, I heard a version of the song not so long ago performed by East Sussex group the Howlin’ Grooves.  Their lead singer, Linda Francis, literally wrung her emotions out through the lyrics which, in an unchecked moment brought tears to my eyes. Soft sod that I am.

Finally, in this chart rundown, we have Joe Jackson with one of his most successful singles “It’s Different For Girls”.  I was never too sure what it was about; happily though, Joe himself explained its meaning in Songfacts 2012 – “It was (a phrase) I heard somewhere that struck me as a cliché…the idea was to turn it on its head and have a conversation between a man and a woman and what you’d expect to be the typical roles are reversed.  So that was the idea of that.”  Many connotations can be plucked from that, so think I’ll leave it there and swiftly move on to television programmes in 1980.

In my humble opinion, one of the best ever comedy sitcoms debuted this month as a pilot, namely Hi De Hi.  This wonderfully acted, lightweight programme was based on the fictitious Maplins holiday camp, written by Jimmy Perry and David Croft, that exceptionally talented duo  responsible for the groundbreaking, timeless Dad’s Army and It Ain’t Half Hot Mum.  Although Maplins was fictional, the programmes were filmed at a real ‘live’ Warners holiday camp in Dovercourt, Essex. Hi De Hi introduced television viewers to a whole host of different characters, all

loveable in their own way.  Led by the entertainment manager, Jeffrey Fairbrother, with his charming, old school persona, the motley crew clashed and worked with him through a variety of absurd events.  Ted Bovis, jovial and scheming, was the camp’s host, with the chief yellow coat (replacing Butlins’ real red coats) Gladys Pugh, whose hobby was to eat men, particularly the blundering Jeffrey, whom she eventually snared for a husband.  Joining these main characters were the likes of the camp comic, Spike Dixon, and of course, chalet maid Peggy whose dithering ways often ended in disaster but whose heart was made of gold.

Following this 1980 pilot episode, the series ran through to 1988, and due to its popularity the BBC planned to make it into a feature film.  For some reason the project was aborted but it was transformed into a stage show.  Thanks to television channels like Gold, Hi De Hi can be seen on a regular basis, and although they’re obviously dated now, the charm, jokes and harmless situations are, I think, as entertaining today as they were first time round. Or maybe it’s just me still being silly decades later.

Oh, check this out.  A staggering 23,500,000 viewers tuned into ITV this month to watch the 1973 James Bond film Live And Let Die starring the suave Roger Moore.  This viewing figure, by the way, marked a record television audience that included my dad and I.  Another first in this January was Newsnight arrived on BBC2.

Finally, a quick look at the films this month.  OK, nothing exciting but, thankfully, three months away was one of the biggest grossing movies of the time, which heralded the start of a series of epic space adventures created by George Lucas – The Empire Strikes Back. Yay! Who can forget the opening sequences of these films that included the phrase “A long time ago in a galaxy far, far away….” And who could ignore the glorious characters introduced in this debut movie, like Luke Skywalker, Han Solo, Leia Organa, C-3PO, Darth Vader, R2-D2, Chewbacca and, of course, Yoda, the diminutive Jedi Master who spoke his own language rather beautifully.

I’ll leave you with that thought for now as I’m due to watch the latest  adventure Star Wars: The Rise Of Skywalker for the second time because “missing things I did” the first time round.