To start off this new year the top three in the UK singles chart, namely Conway Twitty’s  “It’s Only Make Believe”, Lord Rockingham’s XI with “Hoots Mon” and “Tom Dooley” from Lonnie Donegan, held off climbing – and probably impatient – artists like Cliff Richard, Ricky Nelson and Malcolm Vaughan. It was a pretty dull scene for music lovers. However, across the Atlantic in Detroit, Michigan, something life changing was about to start, not only in global music but in the lives of  Detroit’s fledgling singing groups whose only public stage was a street corner, at a  school singing contest or in a local bar.  The city was awash with young untapped talent and this was a young black man’s first port of call.

Berry Gordy Jr was born with music in his veins but coming from a hard working family, he was expected to work in their print shop or general store. However, he wasn’t interested in either. His passion was music and he’d listen to the radio all day, humming songs and making notes. His first significant composition, “Berry’s Boogie”, won first prize in a local talent show, which fuelled his ambition to become a composer. However, his father had other ideas, so Berry followed in his brothers’ Robert and Fuller’s footsteps by joining one of Detroit’s amateur boxing teams.  After rigorous training, he qualified as a featherweight, left school and turned professional.  Boxing attracted many blacks because it was one of the rare industries where they could earn comparatively good money and was an alternative to the drudgery of the car factory assembly lines for which Detroit was famous for.  The young Gordy subsequently met several top names in boxing, including the Golden Gloves champion, Jackie Wilson, who was to become instrumental in Berry’s initial musical career.  Gordy was a competent, proud and successful fighter, although his height of 5ft 6in (1.67m) was a disadvantage and suitable opponents scarce. Nonetheless, he was convinced he’d be a world champion one day but before he could prove his full potential as a professional, the Korean War beckoned him in 1951.

During the two years in the Army, Berry studied regularly, catching up on his lost school days, until he was discharged during 1953.  His musical dream never left him but realising he needed a regular job to fund his plans, he reluctantly worked for his parents.  In the evenings though, he frequented the local clubs to hang out with Detroit’s jazz musicians, soaking up the heady and inspiring atmosphere.

With his savings and a small loan behind him, he purchased the 3-D Record Mart, specialising in selling jazz records to a limited buying market. The business lasted two years, whereupon he had little choice but to work as a low-paid trimmer in Ford’s Wayne Assembly Plant.

The Motown Record Corporation as we know it today was the result of this young black man’s frustration arising from his problems in producing music in a white man’s world.  With sheer determination and probably a certain amount of bravado,  Berry Gordy Jr, turned his desire to make a name for himself in American music into the first major black owned and run record company.  From humble beginnings, Gordy and his handful of staff forced the industry to accept a raw, earthy sound which was to become known as “The Sound Of Motown” throughout the world.

Little did he realise his shaky start would not only introduce a distinctive, multi-million selling musical trend, but many international artists as well –  Diana Ross, Stevie Wonder, Marvin Gaye, The Supremes, the Jackson 5, Commodores, Smokey Robinson, The Temptations, the Four Tops, Martha and the Vandellas, Gladys Knight and the Pips and…phew…the list is endless!

From Gordy’s run-down offices on the rough side of Detroit, Motown’s early music was born.  Based on a simple beat complemented by a handful of repetitive arrangements and verses, against a tight, disciplined sound, Motown music was instantly recognisable.  Gordy readily admits that he didn’t set out to manufacture a particular sound; it just happened. What is clear though, is that the music churned out on his musical conveyor belt produced hits the world over. As recording techniques changed and advanced, and as money poured into his company, he was able to experiment and introduce more sophisticated non-black sounds, while retaining the essential melody and lyric of his early recordings.  Thus the Motown hallmark was stamped – however slightly – on every record released.

Never before in the history of music has a company made such an impact on the world’s record-buying public and, more importantly, retained that impact.  Other companies followed in Motown’s footsteps but failed to reach the international status and selling power that was attached to the little blue ‘M’ on record labels. 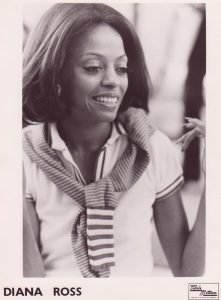 As artists stormed up the American charts, selling millions on the way, that success gradually spread across the world, including our little island when The Supremes’ “Baby Love” was the first British chart topper in 1964.  Two years later the Four Tops took “Reach Out I’ll Be There” to the top, while Marvin Gaye’s “I Heard It Through The Grapevine” repeated that success in 1969.  During the seventies, the company enjoyed a trio of number one titles, namely, an extracted album track from Smokey Robinson and the Miracles’ “Make It Happen” album, titled “Tears Of A Clown”; “I’m Still Waiting”, an unexpected cheesy side, played to death by Tony Blackburn, from Diana Ross, and “Three Times A Lady”, the beautiful ballad from Lionel Richie and the Commodores. 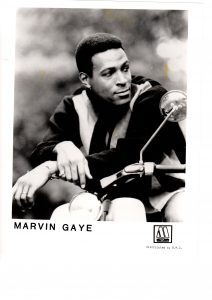 And that’s not all.  During the eighties, Motown enjoyed no less than six British chart toppers – Smokey Robinson’s “Being With You” which was replaced by a 1975 track from Michael Jackson, “One Day In Your Life”. Next up was Charlene’s “I’ve Never Been To Me”, followed by Stevie Wonder’s “I Just Called To Say I Love You” and Lionel Richie’s “Hello”.  Into the next decade, Boyz II Men took “End Of The Road” to the top.

Who knows what the future will bring but, for sure, Motown’s music has been the backdrop to our lives for decades, bringing with it a whole lot of happiness from a unprecedented range of artists in this unpredictable world.  Long may it last!