With Phil Spector’s “A Christmas Gift For You” playing softly in the background, and a box of tissues and a glass of lemsip to hand, I’m a sorrowful sight in the run up to the Festive Season.  Like so many others, the nasty bugs named cold and cough have plagued me for the last four weeks.  Just when I think I’m in the clear, they return hand in hand to kick me down again.  Aw, Darlene Love’s just sung “White Christmas” – now that’d be nice – and The Ronettes have just started “Frosty The Snowman”.  My spirits are lifted!

Producer Phil Spector wrote in 1963 that the album was made with us in mind.  “It comes from me to you with the sincere wish that you understand and appreciate this endeavour into something new and different for Christmas.  I am very proud of my artists at this moment and very grateful for having the opportunity to express myself as I have been able to do in this 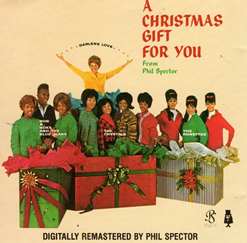 Recorded between September and October ’63, the album treats us to a series of secular Christmas standards recorded against his fabulously successful and all embracing “Wall of Sound”, which, of course, is timeless.  When first released on 22 November it bombed as it coincided with President John F Kennedy being assassinated on the same day.  However, in subsequent years, momentum escalated until the album became an integral part of the Season.  Urgh….hate the taste of lemsip!

The Ronettes (“Be My Baby”, “Baby I Love You”) are also featured with “Sleigh Ride” and “I Saw Mommy Kissing Santa Claus”, and their sister group, The

Crystals (“Da Doo Ron Ron”, “Then He Kissed Me”)  chirp their way through “Parade Of The Wooden Soldiers”, “Santa Claus Is Coming To Town” and “Rudolph The Red Nosed Reindeer”.  This really is an awesome, evergreen Festive release and I’ve always said, probably since 1963 – to anyone who was listening – Christmas wouldn’t be Christmas without this record.  In fact, I do recall some years ago, seeing a cartoon showing the three wise men arriving at the beloved stable in Bethlehem.  One was carrying gold, the other frankincense, and the third – yep, you’ve guessed it –  holding the Phil Spector album. Strange the things you remember; must be the result of my fuzzy head!  Atishoo!

Darlene Love again with “Marshmellow World”; she’s also featured later on with “Winter Wonderland” and “Christmas (Baby Please Come Home)”.  With Bob B. Soxx And The Blue Jeans rounding off this inspiring celebration with “Here Comes Santa Claus” and “The Bells Of St Mary”.

“I, along with (my artists) hope you enjoy and love this album as much as we enjoyed making it for you” Phil Spector further wrote. “And wish you the Merriest of Christmases and the Happiest of  New Years and we thank you so much for letting us spend this Christmas with you.”

Listening to this has certainly lifted my mood and my renewed determination to fight off these bugs. Again!  Meantime, in much the same vein as Mr Spector, I’d like to wish you all a super Christmas time spending it with the ones you love.  If you’re a member of the essential services, I thank you dearly for your dedication in ensuring we are cared for and kept safe.  We’d sink without you.  And for 2020, I really wish us all a peaceful, happy and healthy year.

I’ll be back, firing on all cylinders (I hope) in January, but for now, thank you for your indulgence and may we all get well very soon.