No hanging on to your seat belts this time around because I’m taking a little detour from the past to the present day to tell you about an amazing event that happened in Hailsham, East Sussex, during the last two months.  And it’s all about a film!

So what’s it all about? Well, here goes with a little back story.  I was thrilled to be in on the plot, so to speak, moreorless from day one thanks to Hailsham FM’s champion presenter Martina Mercer. She  steered what can only be called a promotion campaign on air to ensure the town knew what was happening on its very doorstep.  Actually, if Martina (who had a cameo role in the film) had managed to spread her wings further afield, the world would be aware of this family film.

“Never Let Go” , “The Dead” and “The Dead 2:India”. He is also the star of the film, playing a Speedway racing driver, and I must say girls, what great eye candy he is!  Oh dear, a little sexist I guess, but check out his picture on this blog and see what you think!  Offering entertainment for the whole family, the film pushes home the fact that children of all ages spend too much time on their mobiles, tablets and so on, when there is a whole world waiting outside their front door, albeit on a house in Hailsham.

Briefly then, the simplistic plot is based around a notorious and rather sinister crime boss (played

by Jon Campling, Harry Potter’s infamous Death Eater and his motley crew who steal a box of valuable diamonds.  There’s several hilarious moments with these guys, often touching on slap stick and silliness. However, what they weren’t prepared for in this adventure was being chased by two school boyz riding BMX cycles.

The film follows young Sam and Jake Harris, played by Howard J Ford’s sons Felix and Rory, in their determination to retrieve the diamonds. When their mother, played by Angela Dixon, leaves them with her husband during the summer holidays, dad takes control.  Or so he thinks.  Insisting they dump their devices for the real world, he couldn’t have imagined his two sons would become embroiled with criminals.  “(The film’s) sole purpose is to entertain and make people feel emotional and nostalgic” Howard told the Eastbourne Herald.  “But at the same time, if I really can make

people remember not to spend the whole time on our phones – because we all do it – I have got to remember to see life outside of it….For me it’s all about reconnection.  We live in an incredibly beautiful world.”

The thing is, when you’re told a film has been shot in your locality, it’s human nature to try to recognise the different landmarks.  I’m sure several passed me by, yet I can recall the beautiful, lush, sweeping South Downs – the jewel in the county’s crown – so majestic against the clear blue sky.  What ideal surroundings for the speeding bike riders as they escape from the nasty men in pursuit.  In fact, there was such an abundance of high speed racing about, reminding me of Tom Cruise never standing still in his “Mission Impossible” films.  Fair wore me out – and I was sitting down! The tale then took a twist when the boyz’ father was arrested for stealing the diamonds, whereupon the mad adventure began as they tried to prove his innocence,  opening a profound scope for the youngsters to learn from real life experiences, no matter how far fetched.

Other landmarks of note were Arlington Speedway (of course), alongside Hertsmonceux Castle, Eastbourne College, Wannock Village Hall,  and Friston pond and church.  Then there were scenes shot in some old police cells in Brighton (although I first thought it was Hailsham nick, then realised that doesn’t have real people within), St Andrew’s Prep, Jasper Wood Antiques, Love All Café, and in Hailsham, where as well as the house shots, scenes were shot in St Mary’s Walk, showing the said Martina sitting outside Bucklers Café.  I believe I caught sight of Sharnfold Farm, just outside the town, as well.  “I hope it’s a celebration of this area” Howard said.  Well, it certainly kept me on my toes Mr Ford.

A particular scene shot in Seaford, showing Sam and Jake inside a dark bunker, like a brick pill box built during the last war (so I’m told!), Howard was a metaphor for the dangers of the internet, Howard explained  “We see the characters flip open the box lid, mirroring a laptop, and gaze at the tempting but deadly treasure inside.  They connect with these adults, these dangerous people that, to me, is the physical manifestation of how I see the online world….We don’t know what our children are watching.” 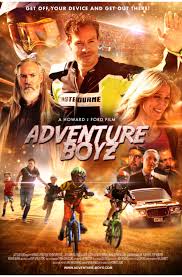 “Adventure Boyz” was premiered at Hailsham’s iconic Pavilion, with the film’s stars in attendance, following which it was screened every Friday morning during the school holidays in August. Full house each showing.  I got to see it on the last Friday where once again, the stars attended, greeting members of the audience, then hosted a question and answer session once the film had finished. During this, they flew paper airplanes into the auditorium, some of which contained prizes, a manoeuvre taken from the film.  My, did the children clamour over each other to catch one – me included!  Could never ignore a challenge!  Selfies (how I loathe that word) were taken with the stars, autographs given and a general warm, friendly atmosphere was created between the actors and fans. It was heart warming to witness the interaction – smiles and hugs all round.

As it was the final showing at the Pavilion, and to coincide with Angela Dixon’s birthday, everyone

(yes everyone!) was invited for champagne and snacks at the nearby B12 Bar & Kitchen in the high street.  It would have been churlish on my part not to accept the invitation, so off I went to join in the party, where certain guests were already bubbling away!  A super way to celebrate the film’s success.

It was thanks to Martina that I first met the film’s cast when she arranged for them to attend the Hailsham Lions Family Fun Day on a sunny July Sunday.  They pitched up a stall where school children (and older) were invited to enter a competition to win cinema tickets for the film.  Needless to say, they were swamped!  This was the first time I watched the relationship between actors and young members of the public;  none of the ‘them and us’, but rather a warm greeting to join the “Adventure Boyz” family.  Loads of photos were taken, many conversations enjoyed; it was simply a warm and fuzzy feeling which, these days, are so rare and such a joy to be a part of.  Who did the kids aim for first?  The Death Eater of course, who, totally out of Harry Potter character, was smiling.

Prior to hitting the Pavilion’s big screen, “Adventure Boyz” was successfully screened at the Cannes Film Festival, and now plans are afoot for a national distribution deal.  If you haven’t managed to catch the film yet, and you’re into family entertainment, this is for you.   Anyway, “Adventure Boyz” certainly put Hailsham on the map in a nice way (for a change).

Anyway, I’ll be back in October when normal service will resume again, so do hope you’ll join me.