The sun’s shining and, like so many others,  I’m in my fifth week of lockdown. While we’re all living through such unprecedented and tragic times, I thought I’m getting out of this decade for awhile to return to the mid-seventies.  And what am I hit with?  The Bay City Rollers at number one in the singles chart with “Bye Bye Baby”.  However, this isn’t as traumatic as last month’s “The Lion Sleeps Tonight” because it’s quite chirpy, happy-go-lucky in a cute adolescent way.  Sway those sporrans boys! 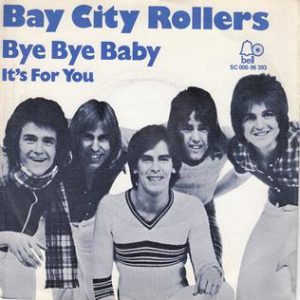 one time, looked set to rival The Beatles in the popularity stakes. With lead singer Les McKeown they soon earned the nickname “the tartan teen sensations from Edinburgh” thanks to singles like the number one title this month which sold over a million copies and dominated British singles sales for six weeks.   I didn’t realise the song was penned by the Four Seasons’ Bob Gaudio and Bob Crewe and that their group actually recorded a version of it with  “(Baby Goodbye)” added to the title.   The Bay City Rollers’ take is faster, with an eight-bar guitar solo, and in case you wondered – the song’s about bidding farewell to an adulterous relationship.  Such was the popularity of these young men that they were the subject of their own television series Shang-a-Lang, a children’s pop music thing, which ran for twenty weeks.  The theme tune was a top two hit for them the previous year. In addition to performing their singles, the shows featured the Rollers in comedy sketches, which often encouraged members of the young studio audience to storm the stage.  Pure mayhem, but hey, that’s show business for you.  Guests like Marc Bolan, Lulu, David Cassidy, Slade and so on, were also invited along to perform, probably to coincide with the release of a new single! 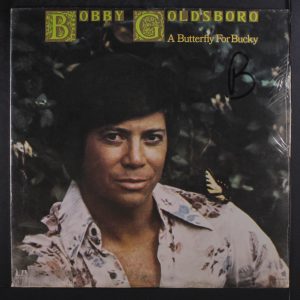 Oh dear, sitting at number two was a song that really lifted the spirits!  Bobby Goldsboro’s “Honey”.  A more dismal song would be hard to find; it’s a sombre tale of a husband mourning his deceased wife.  He’s looking at a tree in their garden which was a mere twig when she planted it…… you get the idea. Born in January 1941, Robert Charles Goldsboro enjoyed a raft of pop and country hits during the sixties and seventies, but it’s “Honey” that sticks in everyone’s minds I guess. I must tell you, in 2011 the highly influential and respected American magazine Rolling Stone ranked the single as the second worst song of the sixties, while others called it “classy schlock”.

From the ridiculous to the sublime – Sweet!  Or to be more precise, their “Fox On The Run”, a lively, fun single, the first written by the group after they moved on from their working relationship with Nicky Chinn and Mike Chapman.  Nothing to do with the lovely furry animal, I hasten to add, but rather the slang word for a ‘fit’ woman. Originally called Sweetshop, the group was formed in London where lead vocalist Brian Connolly was an inspiration and, like the other members, clearly loved what they were doing.  Glam rock at its best:  long flowing hair, brightly 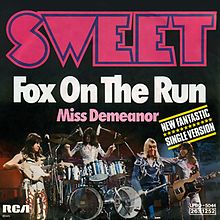 coloured stage gear, buckets of glitter, lipstick and eye makeup.  What’s not to love?  Then there’s the clothes which, for those too young to remember, included bell bottom jeans – tight at the top of the leg, flared from the knee down to the ankle – flowing maxi dresses of  paisley and floral patterns, with leisure suits and oxford shoes, completed by an often over-large gold medallion, for the men.  These were visible from open-necked shirts tightly tucked into the waistband:  looked better than it sounded in a weird kind of way.

Anyway, I’ve digressed slightly, so back to the music.  A couple of notable singles “Take Good Care Of Yourself” from The Three Degrees, and “Philadelphia Freedom” courtesy of the Elton John Band.   The first single was lifted from the trio’s 1975 “International” album which included their previous hit “TSOP (The Sound Of Philadelphia)”, and this little gem.  When “Take Good Care Of Yourself” hit the British charts, their album was re-titled after the single.  “Philadelphia Freedom” was written by Elton John and his songwriting partner, Bernie 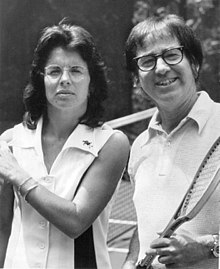 Taupin, for tennis icon Billie Jean King when she was a member of the Philadelphia Freedoms professional tennis team, and when she was ranked as the World Number One Women’s Player for the fifth year running.  Elton and Billie Jean became firm friends, raising millions of dollars for AIDS and equal rights, which reminds me.  You may recall Billie Jean took on the challenge of playing against Bobby Riggs in a much publicised Battle of the Sexes exhibition tennis match.  Playing on 20 September 1973 at the Houston Astrodome in Texas before nearly thirty thousand spectators, an estimated fifty million television American audience and a further ninety million across thirty-seven countries, Billie Jean was victorious.  She changed the gender perception of professional tennis, earning respect and recognition for women’s tennis.  She told the media – “I thought it would set us back fifty years if I didn’t win that match….To beat a fifty-five year old guy was no thrill for me.  The thrill was exposing a lot of new people to tennis.”

Moving on. Of the albums this month, a couple jumped out.  Firstly, “Stars” from the ever-changing Cher.  It was her 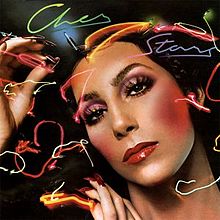 twelfth studio album and, unfortunately, another in a series of poor selling items, yet, to give record companies their due, they kept ploughing on with her.  Anyway, this release was moreorless an album of cover versions like “Love Hurts”, “The Bigger They Come, The Harder They Fall” and Bell Bottom Blues”.  Produced by the multi-talented Jimmy Webb, “Stars” was her debut for Warner Brothers Records, and her first, apparently, without (her then ex-husband) Sonny’s guidance.  The album cover was fabulous though.

Secondly, the Swedish supergroup’s “Abba”, their third album, further paved the way for their global domination.  Alongside the established hits “Mamma Mia”, SOS” and “I Do, I Do, I Do, I Do, I Do” (hate typing that title in case I leave one out), they dabbled with a little reggae in “Tropical Loveland” and pinched the stylings of Rick Wakeman and Keith Emerson on the instrumental “Intermezzo No 1”.  If only they knew then what they would later know……

Several musicals debuted this month in ’75 including A Little Night Music, The Chorus Line and Chicago.  Opening at the Richard Rodgers Theatre at 226 West 40th Street, Chicago ran for nearly one thousand performances until 1977.  It hit London’s West End during 1979 for six hundred performances. The musical was revived on Broadway in 1996 (a year later in London) where it became the longest running musical revival in Broadway’s history, while the London revival was the longest running American musical in the West End.  Of course, plenty of other stage versions cropped up around the world.  Then, as was to be expected, in 2002 the film version appeared, starring, among others, Renee Zellweger, Catherine Zeta Jones, Richard Gere and Queen Latifah.

Another musical very much worth a mention here is the musical fantasy The Wiz: The Super Soul Musical “Wonderful Wizard of Oz”  which opened at Broadway’s Majestic Theatre.  With its all-black cast, and starring Stephanie Mills as Dorothy, it won a staggering seven Tony Awards, including Best Musical.  When Motown Productions purchased the rights to the musical, it was believed Stephanie would continue in her role but Diana Ross 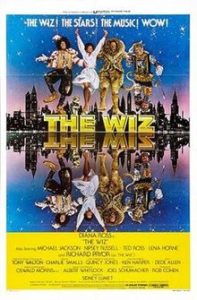 was cast in her place. Much criticism was thrown Diana’s way because at thirty three years old, how could she play a much younger role, and, while the critics were at it, why didn’t Stephanie Mills get the part?  Diana did; Stephanie didn’t, and the cameras kept on rolling.   The 1978 film, now known as The Wiz featured her co-stars of Michael Jackson as the scarecrow, Nipsey Russell, the tin man, Richard Pryor and a host of A-liner singers including Tata Vega, Patti Austin and Cissy Houston.  Despite Motown Productions throwing millions of dollars into the film it was a commercial failure.  Even Diana Ross, who was an international solo singer with staggering success, couldn’t pull it off.

Before we leave this, the most iconic film version dates back to 1939 when, under the name The Wizard Of Oz Judy Garland played Dorothy, with Ray Bolger as the scarecrow, and Jack Haley, the tin man.  Oh, and Terry played Toto, Dorothy’s cute female cairn terrier.  After a quick check, I couldn’t find any reference to Diana Ross’s co-starring canine friend! I have to say, from the research I’ve done, that this is the most commercially successful film adaptation of L. Frank Baun’s children’s book, and I reckon its leading lady had a whole lot to do with it.  When she sings “Somewhere Over The Rainbow” couldn’t you just weep?

No tears today though, as the sun still has its hat on, so I’m heading for the garden with a glass of something naughty but nice, to take advantage of the peace and quiet.

I can only reiterate what I said last time, please take great care of yourselves  – stay safe, stay home and save lives.