Once again, we’ve travelling back a decade to the heady sixties, often referred to as the defining era of music and attitude.  It’s often said, if you remember the sixties then you never experienced them.  Hah, not so as far as I’m concerned because, although the memory is somewhat sketchy sometimes, I happily remember and embrace all aspects;  some good, and others not so, but, hey, it was good to be alive then and be a part of what was to become such a talking point years later.

I re-visited November 1963 last year, which fuelled my appetite for more, and hopefully yours too. So, fasten your multi-coloured seat belts – although they weren’t compulsory back then of course – for a return trip when 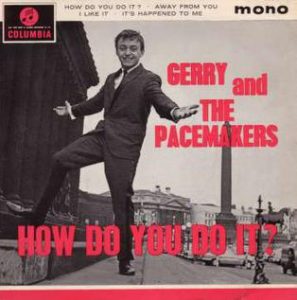 Liverpudlians Gerry and the Pacemakers sat at the top of the singles chart with “How Do You Do It?”. Written by Mitch Murray for Adam Faith and/or Brian Poole, who both rejected it, The Beatles’ producer George Martin agreed to record it on a new group he was working with, namely Gerry and the gang. Actually, The Beatles also recorded it but felt it was a little alien to their image at the time, despite re-working it from Murray’s original demo.  They changed the introduction, fiddled about with the lyrics and added different vocals much to the composer’s distaste.  So, it was bypassed by the Fab Four for “Love Me Do”, their first release. However, the song wasn’t totally lost because it would be included on their 1965 “Anthology 1” album.  Strange how things work out because, after a three week stay, Gerry and the Pacemakers’ “How Do you Do It?” was kicked off the top spot by “From Me To You”, The Beatles’ third single. There were other versions of the song, including one by The Supremes on their “A Little Bit Of Liverpool” album, or, as it was known in the UK – “With Love (From Us To You)” in March 1965.

Why would these ladies record an album like this, you ask?  Well, The Beatles (and Dusty Springfield) were great public advocates of the young black sound belting out from Motown’s studios in Detroit, Michigan. So much so, The Beatles visited the studios during one of their American tours, negotiated to record there, which sadly failed to materialised, but instead recorded a handful of Motown songs as well as including them in their live performances. As if to further cement their love of the record company, The Beatles requested their artists Brenda Holloway join them on one of their US tours and Mary Wells was a support act on a UK tour.

Before I digress further, let’s get back on track. Sitting patiently at number two was Ned Miller with “From A Jack To A King”, and the UK’s very own ‘Peter Pan of Pop’ Cliff Richard with “Summer Holiday”.   Utah-born Mr Miller was a country singer/composer who enjoyed several hits apparently, but the mentioned single was his biggest of his career. It bombed when first released during 1957 but upon re-issue became a crossover seller, and, remarkably, was the 6th most played single of the year in the UK.  Countless other versions followed by the likes of Elvis Presley, Mud and Jerry Lee Lewis, although can’t say I recall any of them.

On the other hand, Cliff’s “Summer Holiday” is one of those singles that stays in the mind forever. Penned by The Shadows’ Bruce Welch and Brian Bennett, this singalong song was the theme from the 1963 film of the same name, when Cliff and three others, who were bus mechanics, hired an AEC Regent III RT double decker bus which they converted into a holiday caravan to drive across Europe into Athens. On the way they’re joined by a motley bunch of three young women, a runaway singer and others, who included Melvyn Hayes, Una Stubbs, Ken Moody and Lauri Peters.  A gloriously happy-go-lucky movie with such a feel good factor, it’s one, I reckon, you can watch time and again without cringing at the dated storyline and acting. Actually, my research reveals that it was the second most popular film of ’63 but not so in America where it premiered two days following the assassination of John F Kennedy.

Other notable songs in the movie were “The Next Time”, “Bachelor Boy” and “Dancing Shoes”, while the “Summer Holiday” single sat at the top of the chart for two weeks before being replaced by The Shadows’ instrumental “Foot Tapper”, also in the film. Then Cliff returned to knock that off for a further week’s stay! Nobody minded because the success stayed in the family.  You may recall it was one of the songs included in Cliff’s impromptu performance at the 1996 Wimbledon Tennis Championship when rain stopped play.   And, you may also remember the film poster – which, believe it or not, took pride of place on my bedroom wall when the film was first released – where its leading man was dressed in a white string vest: that pose has haunted me for years I can tell you!

Other singles in the top ten this month were a real mixture of genres as they included Ronald Wycherley, known as teen idol Billy Fury, with “Like I’ve Never Been”, who was quoted at the time of its release “I have often been called

the last of the rock and rollers and quite frankly I take this as a compliment but I don’t agree with this. There are a lot of great rock singers in this country.” Northern Irish singer, Ronnie Carroll’s “Say Wonderful Things” which was the UK’s entry into ‘63’s Eurovision Song Contest where it came 4th behind Denmark, Switzerland and Italy. In actual fact, Ronnie had represented the UK the year before with “Ring-A-Ding Girl” where it also hit the 4th position. Hah, I promise to make no further mention of Eurovision after last month!

The Cascades’ “Rhythm Of The Rain” and The Bachelors’ “Charmaine” held off Buddy Holly’s “Brown Eyed Handsome Man” and “That’s What Love Will Do” by Joe Brown.  Born in Lincolnshire, his family moved to London to run a public house in Plaistow. During 1956, the youngster formed The Spacemen skiffle group which lasted as long as this particular genre remained popular. He then worked at British Railways’ Plaistow Locomotive works, where he later became a locomotive fireman.  After two years, he moved on because, he said, “the smell of the diesels drove me out when they took over from steam.”  Television producer Jack Good spotted him performing in 1958, and hired him as a lead guitarist for his new series “Boy Meets Girl” and the rest is history.

And just outside the top ten were The Beatles with “Please Please Me” which brings me to my next topic.  Although the intention with this monthly blog isn’t to review films, musicals and such like, I just can’t resist a musical I saw

recently.  As its title suggests, “All You Need Is Love” is a celebration of the group’s recording successes, over thirty titles in all, performed by a soundalike quartet with twenty musicians from the National Philharmonic Concert Orchestra.  Now, to be frank, I don’t normally like this type of thing but as I’m such a Beatles fanatic, decided to take the chance.  My, am I glad I did. “All You Need Is Love” plunged the audience into their astonishing body of work that used an orchestra in the original recording. Picture the four young musicians/singers centre stage, with musicians sitting either side of them, a screen high above them showing visuals relevant to the performed songs but if I’m honest, it wasn’t needed and added little to the evening’s enjoyment.  Add to this the plethora of strobes, dry ice, stage and auditorium lights, working with an impeccable sound system newly installed at Eastbourne’s Congress Theatre, and you’ve got it.

The attention to detail is impeccable: hairstyles and dress in particular which changed to represent certain music periods in the group’s life. For instance,  they wore the appropriate multi-coloured ‘gear’ for the “Sgt Pepper’s Lonely Hearts Club Band” section. While during the final sequence of later Beatles, Emanuel Angeletti who played Paul McCartney, was bare footed, and Paul Canning in his role as John Lennon, wore shoulder length hair and a white suit. Like Lennon, Paul acted the fool with his dance routines and off-the-cuff remarks, which was an acceptable personal touch methinks.  Luke Roberts was Ringo Starr, and John Brosnan played George Harrison.  Working together as a unit, they steered the songs in much the same way as the Fab Four had done, with enthusiasm and love.

As I mentioned earlier, their performed tracks were those that used orchestras in the actual recordings, so this cut out many of the early singles. However, hearing the iconic “Hey Jude”, “Yellow Submarine”, “Penny Lane”, “Yesterday”, “Eleanor Rigby”, “Let It Be” and of course the musical’s title was absolutely sensational live. The musicians worked as one, often passionately so, with their sweeping, moody string section highlighted by sobbing violins, alongside the quirky trumpets and frenetic percussion, which elevated the songs to a new dimension. In fact, these guys and girls managed to perform on stage songs the real Beatles couldn’t or wouldn’t, and I’m thinking of those from “Sgt Peppers Lonely Hearts Club Band” in particular.

Summing up then, and without listing all the included songs, this musical is a wonderful, electrifying spectacular that transports you to those magical days when all you needed was love.  But!  And there’s usually a gripe from me.  John Lennon wrote “Imagine” not The Beatles, and someone should have told the scriptwriter that.  However, Paul Canning’s performance was breath taking  which was probably why poetic licence was allowed.

I’ll leave it there for this month but like the Terminator says “I’ll be back” and hope you’ll join me.