As a small child growing up in the fifties, I don’t recall Halloween ever being on the radar.  Bonfire night and Christmas were a great cause for celebrations however, but not Halloween.  Many years later I moved home to a new 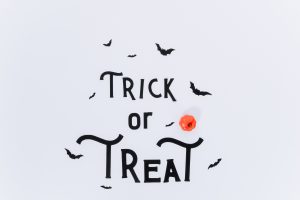 housing estate and had my first encounter with the not so pleasant side of this event.  To my cost I didn’t know anything about trick or treating or what was expected apart from the dressing up as ghosts and spooks etc. but soon found out.  I watched with some amusement from the darkness of an upstairs window as big groups of youths dressed in long black gowns and ghoulish masks hid in the shadows while ushering the younger ones first to my neighbour’s house.  Unfortunately, I turned on a light and in an instant they were all gathered outside my front door. I tried to make out there was nobody at home, but they weren’t fooled and with lights now turned off they still kept knocking.  Eventually they got fed up but before leaving a young child probably about six to eight years old shouted through my letterbox “You F******* B****”.

Living on my own the whole experience just freaked me out, but that probably wasn’t the worst, they threw eggs at the windows and I later learnt friends had tyres of cars parked on private driveways slashed.  For a long time on these occasions I made sure my house was in total darkness and as time went on this sinister, aggressive side of nature seemed to disappear and groups of young families would turn up with small tiny tots looking for their treats.

Some years later I decided to follow a more Spiritual path to life and connected with a group of like-minded women, this led me to joining a coven and becoming a Wiccan.  On the night of Halloween we would venture in to Chanctonbury Ring, these woods have long been associated with mysterious forces, to make a sacred space and decorate an altar with seasonal offerings of pumpkins, apples, flowers and foliage. A fire pit was lit and we would sit with pictures of our ancestors and loved ones passed over, telling stories and drinking mead, an ancient Celtic drink made from honey in their honour.  We then called upon the Lady and Lord of Nature to bring blessings and joy to our celebrations for the coming year. To my amazement faces would suddenly appear watching us from a distance, I later found out that people actually came to the woods in the hope of meeting a real live white witch and of course we did our best to make their evening something to talk about in the pub afterwards.

Joining a spiritual group taught me a different side to Halloween, I learnt all about the changing of the seasons and how important these rituals surrounding this festival were to our ancestors.  Halloween evolved from “All Hallows Eve” a pagan holiday honouring the dead and is linked to Samhain (pronounced as “sow-in”) which means summers

end in Irish Gaelic. It is an ancient Celtic spiritual tradition usually celebrated from 31st October to 1st November to welcome in the harvest and usher in the “dark half of the year”. According to Celtic mythology this is the time when the veils between the living and the dead thin during Samhain, making it easier for the spirits and souls of the dead to return and walk among the living.

Going back hundreds of years in an area which is now Ireland, United Kingdom and northern France, people would light bonfires and wear costumes as saints to ward off the ghosts and evil spirits.  They would then go from door to door which is probably how the origins of trick or treating grew, when a treat (sweets) or trick (mischief) was made against their neighbours.  As part of the autumnal celebrations, the tradition of carving faces into vegetables dates back to the Celts, lighting the way to their homes for good spirits.

The Crone, a wise old woman and also a witch appears in most spiritual and mythological traditions, recognizes death and decay as part of the cycle of life at this time of the year. I would say to those who think it’s funny to celebrate Halloween by deliberately going out to scare people that you might be greeted by a real live witch opening her front door to you. So choose your victim’s wisely!