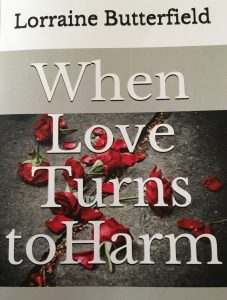 Lorraine Butterfield grew up in Hereford in the West Midlands.  In her early twenties she found herself living in West Sussex and later moved to Seaford.  She is a single parent of three girls and they have a Labrador called Shadow.

Lorraine started to write, ‘When Love Turns to Harm’ six years ago after going through a very emotional and stressful time.  The book started as journal and diary entries which she converted to story writing as a cathartic way of making sense of all that had happened.    To deal with the traumatic events in her life, Lorraine started to do self-healing techniques such as Reiki and Emotional Freedom Technique (EFT – referred to as Tapping) and Matrix Re-imprinting (a technique that followed on from EFT – used to access subconscious negative belief systems and memories and turn them into positive ones).  The memories of the past came thick and fast and Lorraine discovered that she had repeated a similar pattern in her relationships.  All the time Lorraine documented the memories as they came.  The self-healing writing grew and grew and Lorraine drew upon these experiences and then one day realised that the writing had turned into a book.  Not just a book but a book that she felt could help other people.

The book follows the life of a young lady called Jennifer Smith.  She is a happy-go-lucky young lady full of adventure and very determined and independent.  She works hard and is a very capable person. She travels extensively and finds herself in unfulfilling relationships, eventually ending up in an abusive marriage.  Her story tells of her strength of mind and courageousness and how she came through the other end.  It shows how easy it is when you have a low self-esteem to end up in the wrong relationships but also, it is a story that gives hope and inspiration for anyone who may find themselves in this situation.  Even if you have never been in an emotionally or physically abusive relationship, the book has a message for everyone.  It shows how the power of mind can overcome even the greatest adversities.  There are lighter hearted moments of when she has travelled and the sites she has seen:

“The more you do in this life the more you realise what you think you are missing out on but sometimes what you have is all that you need.  I went away 3-4 times a month to most amazing beautiful places.  The first time the airline flew to Baku in Azerbaijan, I was so excited.  It was the first time that tourists (well crew and oil workers) were permitted to fly into the country.  This war-torn country had very architecturally beautiful buildings that were looking very tired.  I compared it to Russia, even though I had never been to Russia.    The crew stayed in quite a plush hotel in the centre of Baku and it even had a Casino.  As far as I was aware, it was the only hotel there.  It seemed very unusual to me for Baku to have a Casino, as most of the locals were extremely poor, although, it was rumoured that Russian mafia lived and ruled within Baku.  At the centre of Baku were the old silk Markets, it felt very romantic to me.  It could have been a scene out of an Arabian movie.  The buildings were low built with beautiful arches that surrounded a square.  I could feel how the energy would have been in years gone by when traders would travel far and wide to bring the best silks to sell.  When the people smiled, they were genuine smiles and their teeth were almost all gold.  I had asked in the hotel about why so many people had gold teeth and had been told that, apparently, when the war had started the locals hid any wealth that they had.  Therefore, the best way to hide their gold was to have it put into their teeth to keep it safe.  Walking around I witnessed the men sitting around playing chess in the park.  The women and children were the workers in Baku.  Whilst walking through the park a wedding party passed me by. It was like watching something from the Smirnoff advert I had remembered from days gone by.  The bride wore a very large white dress and the skirt looked as though it had three or four steps from her waist and make up that was completely overdone.  I gazed on in awe as this beautiful bride joyfully and gracefully moved passed her with her family as an entourage, happy chatter and joyful laughter sang out.  I thought about how my marriage to Finlay would be.  The happiness that it brings when two people who love each other celebrate that special connection and how happy we were going to be.

Baku is on the Caspian Sea and obviously, a stroll along the seafront was a must for me as I loved being by the water.  I felt very comfortable near water and it always made me feel so calm and relaxed.   Although the sea in Baku was not quite as I imagined.  There was slick oil floating on the water and on the horizons, are the mighty oil refineries pumping away.  The smell was not the seaside smell that I had been used to but that of rotten fish.  On the second day of this trip I had encouraged two crew members to come out walking with me and whilst walking along the seafront we met a man who offered us the opportunity to go out on a ferry boat and have a trip around the bay.   Never one to miss an opportunity, I jumped at the chance.  My colleagues looked at me in disbelief, laughed and joined me.   The boat was so old and rusty and we were all quite relieved when the journey was over.  I was surprised we lived to tell the tale but it was an experience and one which I would never forget.  Whilst on the boat I got to see a beautiful house that had been derelict for quite some time.   The building had been decorated with gold but the door had been barred with iron gates which were highly padlocked.   I was told by a local that it was Rockefeller’s old house and that when he had moved out it had been boarded up and that is the way it had stayed.   I was sure it must have been a jewel in the crown many years previous.

I had everything I could hope for, a man in my life who wanted to marry me, my dream career and money.  There was nothing more I could have hoped for or wanted.  I felt strong, confident, independent, I knew what I wanted.   So why was it about to change?” 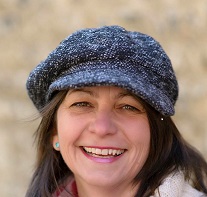 Over the last few years Lorraine has been running her own business as an Emotional Freedom Technique (EFT (referred to as Tapping))/Matrix Re-imprinting Practitioner, a Reiki Master Teacher and reads Oracle, Angel and Tarot Cards.  She has used her energy healing techniques not only for self-healing but also to help others.  If you would like to know more about the techniques Lorraine uses or discuss it further with her, you can contact Lorraine via her website www.lorrainebutterfield.co.uk.

Lorraine’s book is available to buy as a paperback or Kindle on Amazon.  The link is below: