Sharon has been involved with Motown music for many years and has some wonderful stories about the music business that she will be bringing to the magazine about her life within music. Below is her introduction to all you fantastic readers about Sharon and a tiny snapshot of her life within Motown. From October she will be writing a monthly column for Purple Conversation titled “Remember the Time”,   I am sure you would all like to welcome her and look forward to reading her special stories as I know we are. Sharon it’s over to you……

I was born in East Sussex and educated at St Phillips convent school in Uckfield before attending the Lewes Tertiary College where I studied secretarial duties.  The dreaded Pitman shorthand drove me to distraction but happily I left the college armed with good grades and excellent typing skills.  These, of course, proved invaluable in later life although at the time, they were a means to an end to secure a secretarial job.

While I earned a living during the day working as a secretary for our local council, I became obsessed with Motown’s music and artists.  This interest was fuelled by Dusty Springfield, and her constant promotion of the Detroit sound via her interviews and live shows. I became the southern secretary for her fan club, met her several times, so my obsession grew.

To cut a long story short, I joined the Tamla Motown Appreciation Society run by Dave Godin, a valued friend and fan of Berry Gordy, founder of Motown Records. Among other things, the TMAS spearheaded the first British Motown Revue in March 1965.  When this Society closed, Motown in Detroit wanted individual artist fan clubs opened in the UK, so I applied to run one for the Four Tops, my favourite group of all time.   With the help of Motown’s publicity department based in Detroit, I got my wish and during the 1960s was able to help promote the music I loved so much from my parent’s home in Uckfield, East Sussex. Various fan clubs opened up across the country for other artists and the  secretaries regularly met up in London to listen to the all-consuming new American releases or organise Motown parties for fans in London hotels. Jimmy Ruffin was a regular visitor at these.

To this day, I remember printing stenciled copies of the Four Tops’ newsletters on the machine at work – after hours of course – and my mother and I enveloping them up and cramming them into the local post box, much to the dismay of our local post office!  Fan club members would also visit our house, St Michael’s Lodge, just to talk Motown.

I lived with my parents until I was 21 years old when I moved to London to work for EMI Records.  I pined to be a part of that industry because my only ambition was to join the music business  – but I didn’t know how. So, in desperation, I wrote to the EMI Records address printed on their record sleeves, asking for a secretarial job; was interviewed and was duly hired as a legal secretary. Ah, a foot in the corporate door.  A country girl in the big city of London was a huge step to take, but I did it.

My decision to move to the big city coincided with other fan club secretaries doing likewise.  From a flat in Ealing, London, and with  Motown’s blessing, the various fan clubs were amalgamated under one banner – Motown Ad Astra.  It was an awesome task, operating this club during the evenings and every weekend. Not only did the Club provide an excellent service to members, but we also entertained visiting Motown artists.  Either driving them around London, assisting with their touring schedules, and so on.  By doing this, a personal and professional bond was forged – some which remain relevant today.

From EMI’s legal department, I worked my way through the various departments until landing the position of personal assistant for the deputy manager of the company.  This was during the 1970s, the same period when the before mentioned Dave Godin, who was now writing for Blues & Soul, approached me with the offer to write a Motown page for the magazine.  This I did for two or more decades, later branching out as one of the magazine’s top journalists, interviewing major and minor acts.  A huge thrill, as my love of soul music broadened but my obsession with Motown was never replaced.

In time, Motown Ad Astra closed down and was replaced by the “TCB” magazine for several months. I couldn’t maintain that and write for Blues & Soul and felt by spreading the word in the magazine I’d reach a far wider audience. So, with a heavy heart, “TCB” closed down.

As far as I can remember, I’ve always written whether it be short stories or just notes from a place I’d visited or a song I’d heard.  Having said that, I also fancied myself as an artist, and for some years splashed around with brightly coloured oils on canvasses – until I lost interest!

Thanks to my writing for Blues & Soul, and my growing reputation in the soul music industry, I became publicity manager for three American labels – Fantasy, Stax and Salsoul – all licensed to EMI Records.  From there, I secured my dream job as publicist for Motown, working from EMI’s offices in Manchester Square, in the heart of London’s west end.

For two years I worked with the company’s acts, ranging from Diana Ross, Jermaine Jackson, Marvin Gaye, The Supremes, Smokey Robinson, Teena Marie, The Temptations, Martha Reeves and the Vandellas,  and so on.  The absolute joy of meeting artists I’d previously adored on record was something I never dared imagine.

Personally speaking, as I’m a factual writer, the best part is being able to pass on information about an artist or company that might be lost in the passage of time otherwise.  During my time working hands-on at EMI Records and Blues & Soul, I collected memorabilia, news clippings, transcripts of my interviews, visuals, and all manner of things which are priceless in my work.

I always write in my office at home, leaving it only for comfort breaks, to eat, and sometimes sleep.   Notebooks and pens are scattered all over my house, including the toilet, just in case something comes to mind and needs saving. Yes, as I’ve got older, so has my memory. It doesn’t work as well as it did. I also like the solitude that writing demands, and when a particular book is finished – then watch me go!  Rejoining the human race can be fun!

I’m fueled to continue writing because there’s still so much for me to tell. As I’m getting older, I don’t want to run out of time, so am constantly writing notes and researching towards future books. There’s still a huge market for accurate books about the company and I’ve still got much to tell, because of the privileged position of befriending many artists who are, thankfully, happy to assist me with projects.  Yes, I am extremely fortunate to have these relationships and never, ever, take them for granted.

I penned my first book “Marvin Gaye” in 1984.  “Motown:The History” followed in 1988 after a deal with Guinness Books. This was a magnificent book mostly due to the extensive colour visuals and the inclusion, for the first time in any publication, of the US and UK album and single discography spanning thirty years.  The text was rather good as well!  Long out of print of course, the book is considered to be the Motown bible.  Interestingly, it’s also used as an autograph book by fans who lug the huge tome to performances for artists to sign.  Martha Reeves once said that she’s autographed this book more times than she cares to remember.

During the 1990s I revamped and extended my first book and with the artist’s knowledge published “Marvin Gaye: I Heard It Through The Grapevine”. Tragically, Marvin was shot dead by his father before he could see the finished project. I then changed tact to see if I could write about music outside the Motown box.  To this end, Mainstream Publishing took on my trilogy – “Every Chart-topper Tells A Story – Sixties, Seventies, Eighties”.  It was an interesting project which I greatly enjoyed compiling.

Into 2000 it was back to Motown with “Diana Ross: A Legend In Focus”, another elaborately designed book thanks to the brilliant designer at Mainstream.  Three years later, Carlton published “Stevie Wonder: Rhythms Of Wonder”, and during 2006 I compiled a selection of my Blues & Soul interviews under the book title “Chinwaggin’” for Bank House Books. Three years later Equinox published “Lionel Richie: Hello”, then in 2008 Carlton took up the publishing rights for “A Girl Called Dusty”.  At last I had written about the singer who had steered me on my Motown adventure.

As an aside, when Diana Ross penned her autobiography “Secrets Of A Sparrow” she enlisted my help as a researcher and duly credited me in the book as such. Over the years, I’ve compiled CDs for her, and written her sleeve notes and tour programmes.  Always happy to write about Motown, I’m so lucky that my words can be seen on countless CD and vinyl compilations, and I’ve been a regular talking head on television and radio programmes devoted to the company, although at the end of the day, I prefer to write than talk!

During 2014 Bank House Books published “Mighty Real: Sharon Davis Remembers Sylvester”.  You’ll recall I mentioned earlier on working for Fantasy Records. One of the artists I befriended from that label was the lovely, outrageous disco singer Sylvester, when he first visited London to promote “You Make Me Feel (Mighty Real)” during 1978.  Not only did the single soar into the British chart – and later a top ten hit in most countries – but it elevated him into the higher echelons of dance music.  Spending almost every waking hour with him, I hoarded a million memories with personal visuals to match. We remained in contact with each other when he left Fantasy, and regularly met up with he toured the UK.   When he died from AIDS in 1988, I knew I had to pay tribute to this great artist, so decided to publish our time together to give his fans an exclusive insight into his hit in the making.  Sharing the moments and living the dream, so to speak.

Phew!  Where to draw breath. So, before anyone loses the will to live, here comes the closing paragraph.

I’ve written for the website soulmusic.com for several years now, and joined Hailsham FM as a presenter.  Playing what? Motown and soul! Another dream that came true.  Book-wise, am currently writing a Motown-related tome, so you see, those four years from 2014 haven’t been idled away.  Now, I’m delighted to join Purple Conversations where, I promise, my monthly blogs won’t be as long as this one.

Thank you for the invitation ladies and I very much look forward to interacting with your readers. 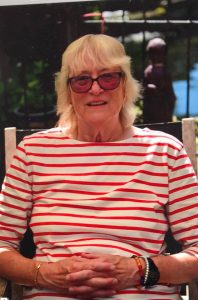