Yesterday my friend and I spent a lovely day at the beautiful Leeds Castle which is just outside Maidstone in Kent. The Festival of Flowers is in full swing at the Castle and this year the theme of the Festival is An Enchanted Castle bringing the world of Fairy-tales inside.

The Festival was opened on Saturday 23rd September by English Garden designer and TV personality Joe Swift and is on until Thursday 28th September. During the six days of the festival there are many talks and demonstrations happening.

As we wandered along the route that leads you through beautiful State Rooms, passage ways and nooks and crannies all decorated with large and small floral creations by various florists and designers.

Every turn of a corner or entry into another room brought heady scents and beautiful flowers that turned the State Rooms into such delights as Rapunzel’s Tower or a Fairy Glen. The many hours of work that must have been put into each creation in both design and building was very evident.

As we walked along the sounds of  “wow” and “aah” could be heard as everyone passed by another masterpiece. One of the stewards told me that this is the largest display that they have had so far, each year this popular festival is growing in popularity and size.

After all that walking my friend and I needed some refreshments, and we decided to go into the Castle Tea Rooms, the menu displayed outside looked very inviting, and when we went inside it was very welcoming with the food looking amazing. The Victoria Sponges and Chocolate cakes were three tiered high and it took a lot of willpower not to have a slice. Homemade soup, Quiches and freshly made sandwiches and rolls were also available and looked very appetising. We settled on Quiche with salad and coleslaw which was as delicious as it looked.

A walk around the grounds showed what a beautiful piece of the countryside the castle is set in. There are stunning views whichever way you look. It has an abundance of wildlife, Black Swans, White Swans, Canadian Geese, Ducks, Moorhens we even saw a Heron flying over the lake. There is a falconry centre with various types of birds of prey situated at the far end of the grounds close to the Maze.

There was much that we didn’t see but I would love to go back another time to see the rest of the attractions and maybe even go for a punt around the Moat. 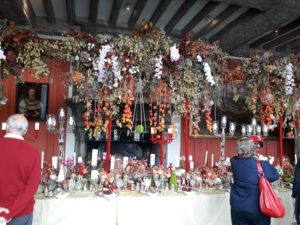 “Alice in Covidland” How my artwork helps me through lockdown. “Imagination is the only weapon in the war against reality”  Cheshire Cat The silver lining of the first lockdown was potentially the gift of time, […]

We are very pleased to bring you this week’s Astrology Card Reading by Asha Kumari. Due to technology problems there is no video this week just a written transcript but Asha will be back on […]